All week it had rained  but the forecast said dry and cold for the first Friday ride of the 2016. Even the forecast on Friday morning said the same. But the weather wasnt listening and the rain fell steadily .

However by 9am it remembered and 3 hours late the rain stopped and a watery sun was glimpsed. Ray, Heather, Sharrin & Andy met at 9.30am at the Market Cross , with Andy on his first Friday ride . Agreement was reached to head to Hornsea and the ” Chocolat Cafe” and all set off . It was a steady , flat ride ride and as we got closer to Hornsea blue skies were spotted. The roads were wet and  muddy and Andy was relieved he hadnt brought the bike that he had cleaned and left to dry …in the living room!  The cafe stop was a good chance to catch up on the recent festivities and fill up on breakfast paninis and scones…essential to keep everyone warm ! On the way back to Beverley ominous black clouds appeared and sadly this shower of rain was bang on time and rain jackets were donned- all except Ray who said he would put his on when it rained properly… used to the rain those Lancastrians. Of course the rain stopped as we arrived in Beverley , slightly damp but all very glad that we had been out and got the first of, hopefully many more , Fantastic Friday rides under our belt. 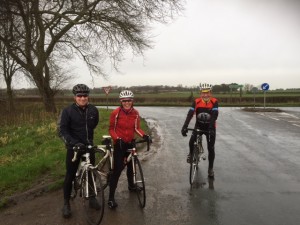