You are here: Home / Rides / Ladies of the Knight’s and Matthew out on a Friday Afternoon 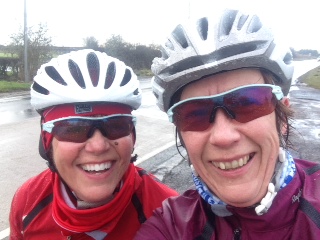 It all started full of promise, the wind had died down, the sun was shining and yes although it was chilly they were all happy to at last to be out on a Friday run.
Sharrin and Heather met up with Matthew and off they went, heading via Bracken, to Cranswick. As they got closer to the coffee shop so did the ominous black clouds and a decision was made to bypass the coffee stop ( yes really !!) and race for home. However 5 minutes later the rain started, the wind blew and the 3 eager cyclists battled their way back home. Freezing rain and then sleet met them on the way but as they reached home blue skies appeared as did the smiles!
Plans were made to meet the next Friday, can’t put them off!!