Sunday the 23rd of August 2015 was a day that was characterised by hot air and strong wind, but that’s enough about Sue Bleazard having to spend the day at home and put up with Ray, it was also the day The Beverley Knights tackled Rosedale Chimney.

The day started with a gentle spin across the flats of southern Ryedale to get the legs warmed up for the hills to come. One hill particular was in the minds of all the Knights, the dreaded Rosedale Chimney and its notorious 33% gradient. For this reason a sensible pace was set so that as much energy could be kept in reserve.

As the group arrived in the village of Wrelton and headed towards Cropton the terrain started to change, heart rates started to rise and legs began to soften. Until now the only difficulty had been the ever present blustery wind which had provided annoyance only for the front riders whilst others sought shelter. But as the ride started to rise and fall there was no hiding place and the group started to splinter as people attempted to ride within themselves. If one dared to glance to the left they could see the near vertical cliff face that soon they would have to slog their way up.

After some lumpy miles the group arrived in the village of Rosedale Abbey and started their individual attempts to conquer the beast that is Rosedale Chimney Bank. One by one the knights tackled the climb with their cranks turning painstakingly slowly, Knights clung to the edge of the road desperately trying to find the gentlest gradient as they negotiated three brutal bends. This is where Nick B came into conflict with a motor cyclist as he crept his way around one of the hairpins on the wrong side of the road. After the hairpins came the brutal 33% section rising like a wall, one by one the Knights zig-zagged their way up to soften the gradient however the gradient proved too much for Heather and Nick who failed to attempt this strategy. The only other casualty of the climb was Andy who with a chest full of phlegm struggled valiantly to get to the top but could not.

The prize for cresting the brow of Rosedale Chimney Bank is a glorious decent across the moors towards Hutton Le Hole. With the sun on their backs and the hardest climb of the day the Knights enjoyed a fast but leisurely blast surrounded by a beautiful carpet of heather set against a back drop of blue sky. Once in Hutton Le Hole and true to form a pub was found! With probably the greatest amount of effort exerted all day the Knights managed to resist a pint.

From Hutton Le Hole the destination was Helmsley via more hills. On roads untouched by traffic the Knights crisscrossed the North Yorkshire Moors, and whilst the gradients were not as severe as Rosedale they were rarely below 11%. With more stunning vistas and views of the moors the Knights battled across the moors to Helmsley and a well-earned lunch. I imagine it’s never easy running a café, I imagine it’s a task made more complicated by 14 cyclists who order individually arrive at separate times and sit around the same table. So hats off to the staff at the café in Helmsley who eventually got everyone their food and drinks and thank you for the extra Americanos which seemed to appear free of charge every 5 minutes. (I am sure there is a family somewhere still moaning that they never got their drinks!)

From Helmsley all that was left was a leg sapping blast into the wind along the “flat last 10 miles” (Gregory 2015) Until finally we were back at Amotherby where the adventure began. 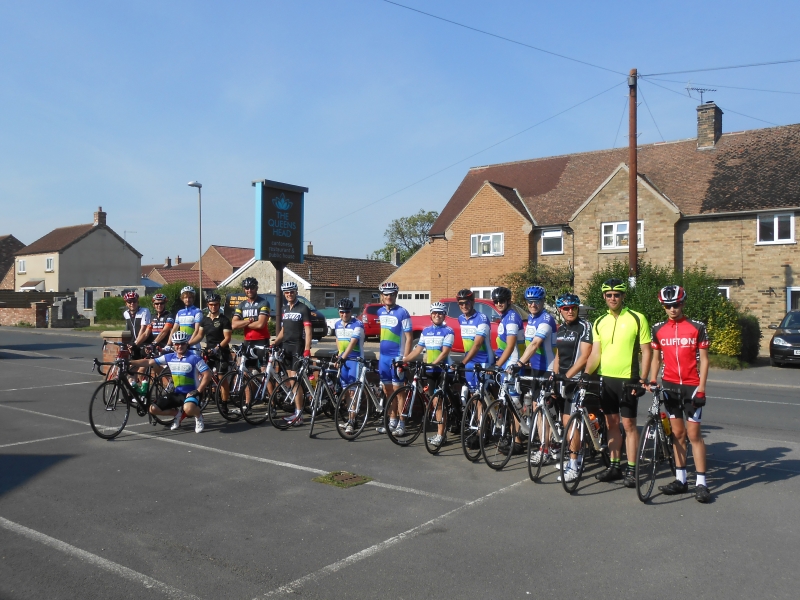 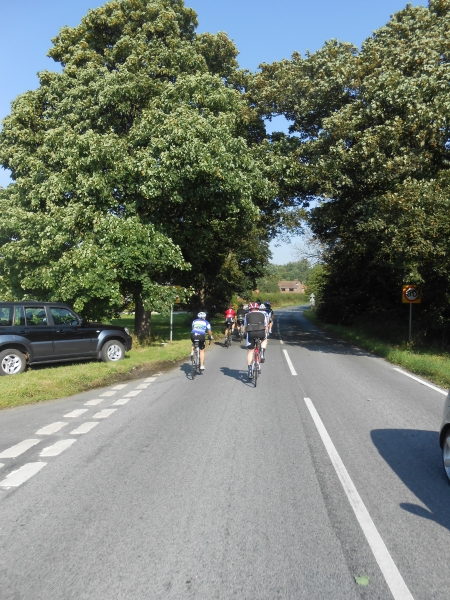 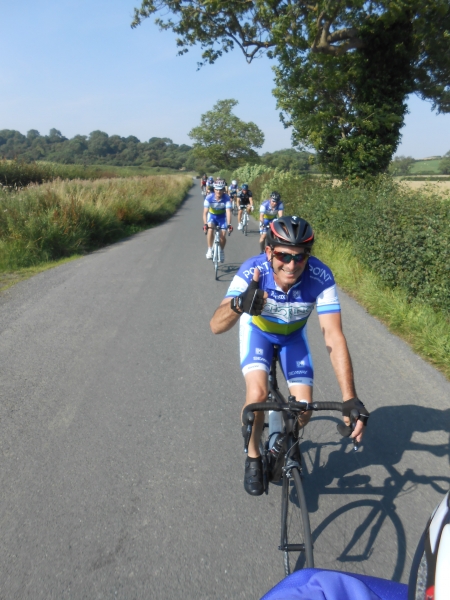 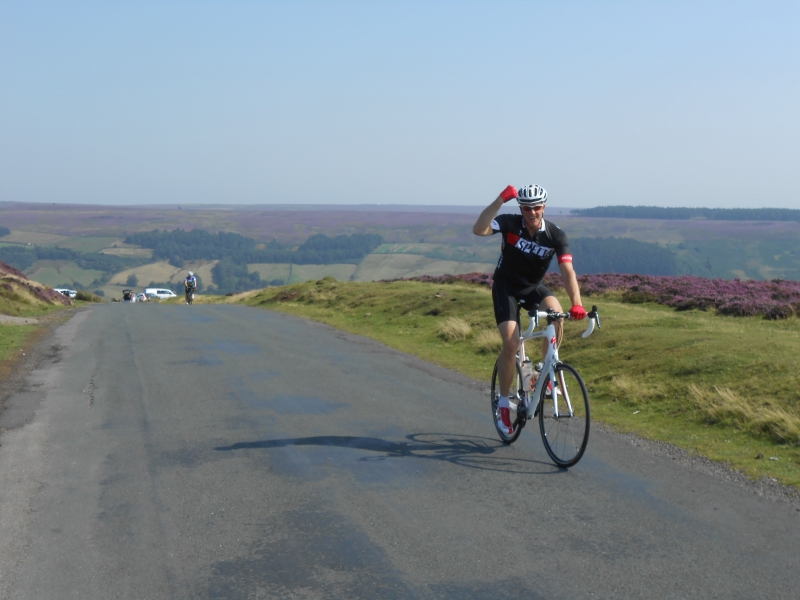 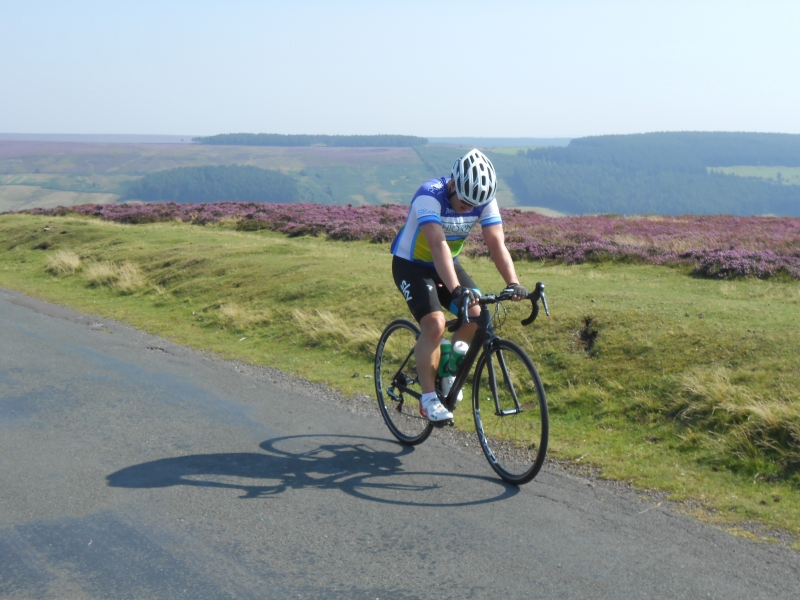 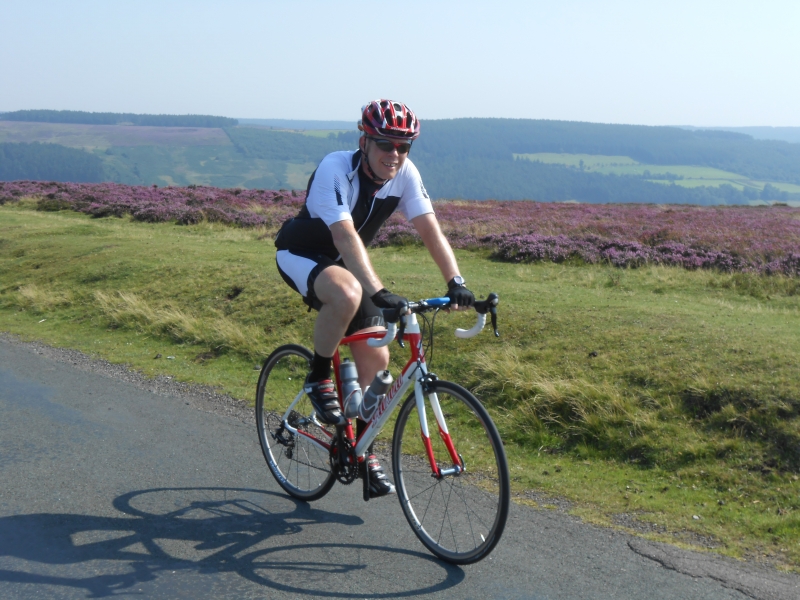 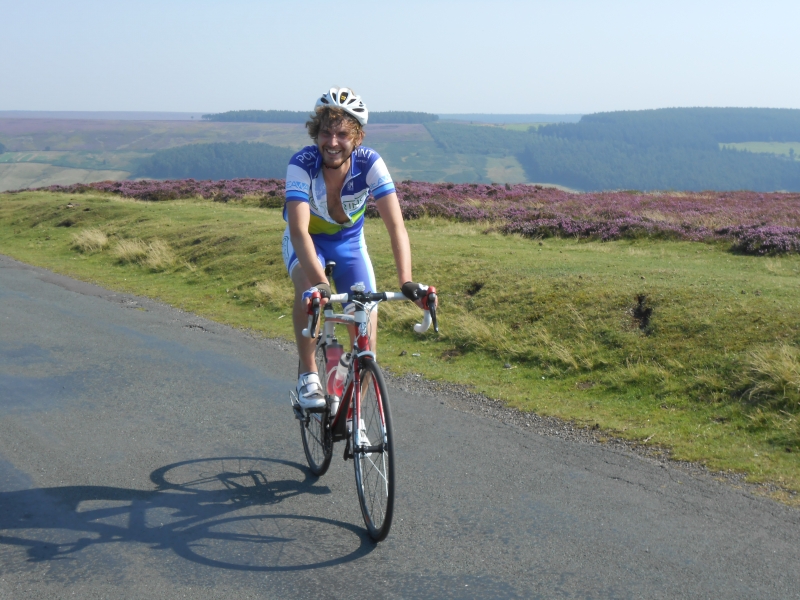 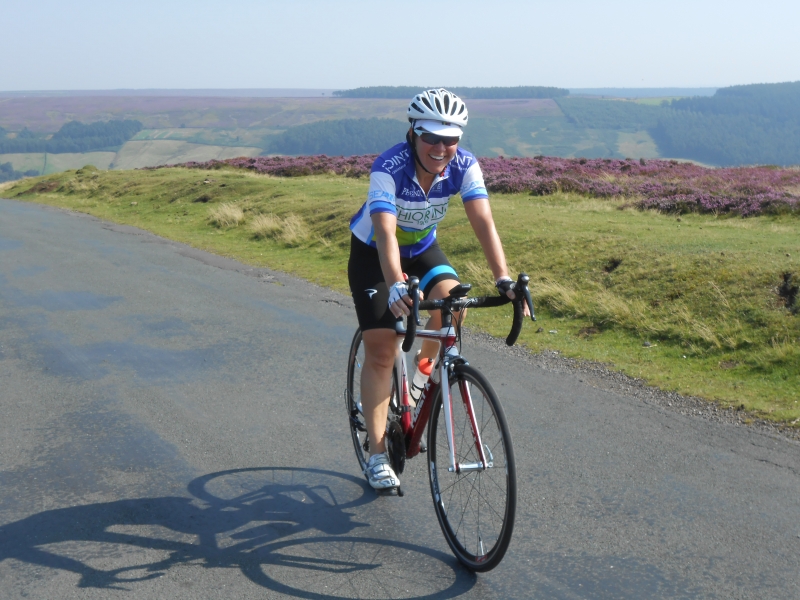 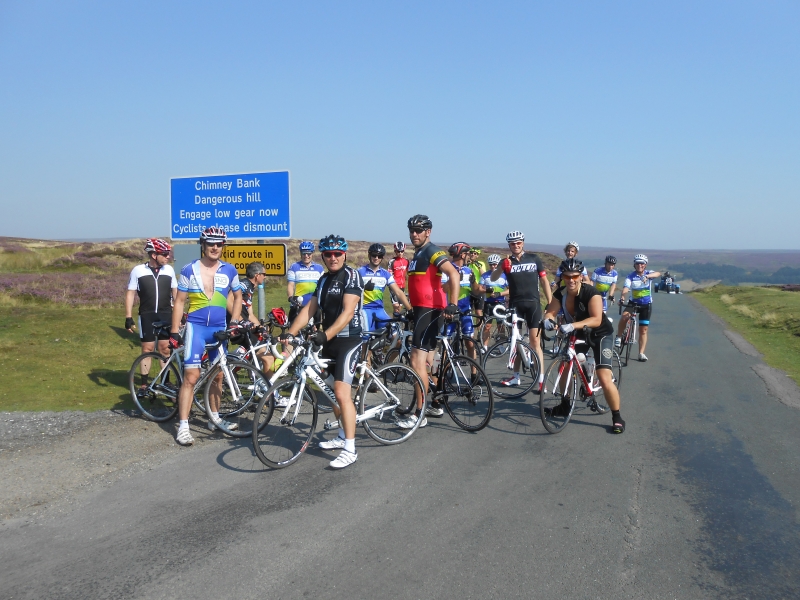 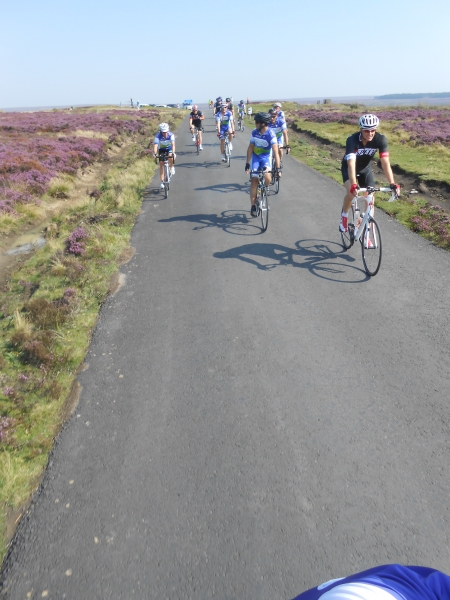 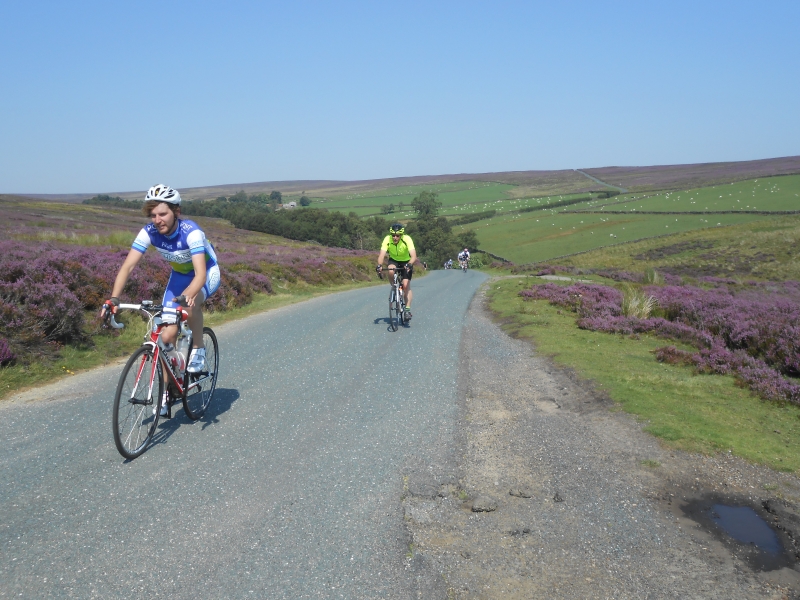 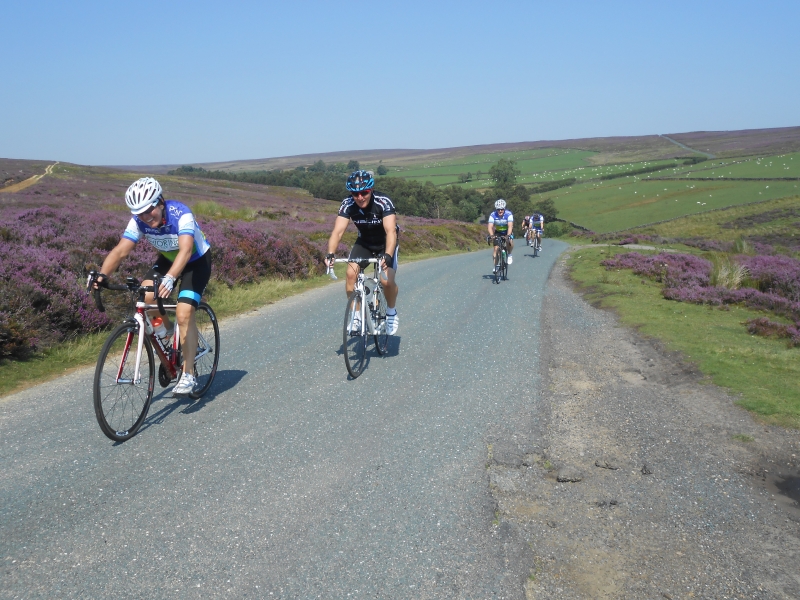 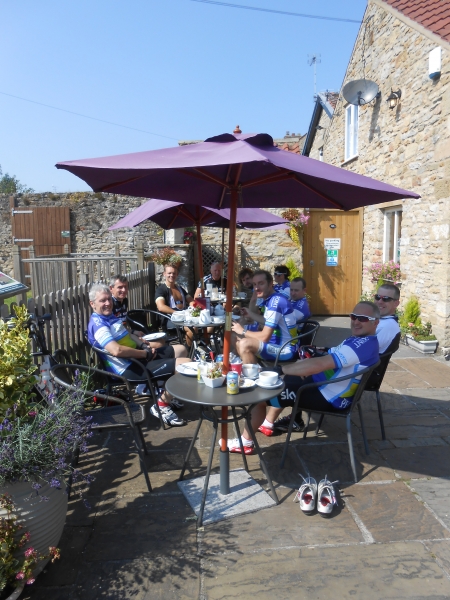 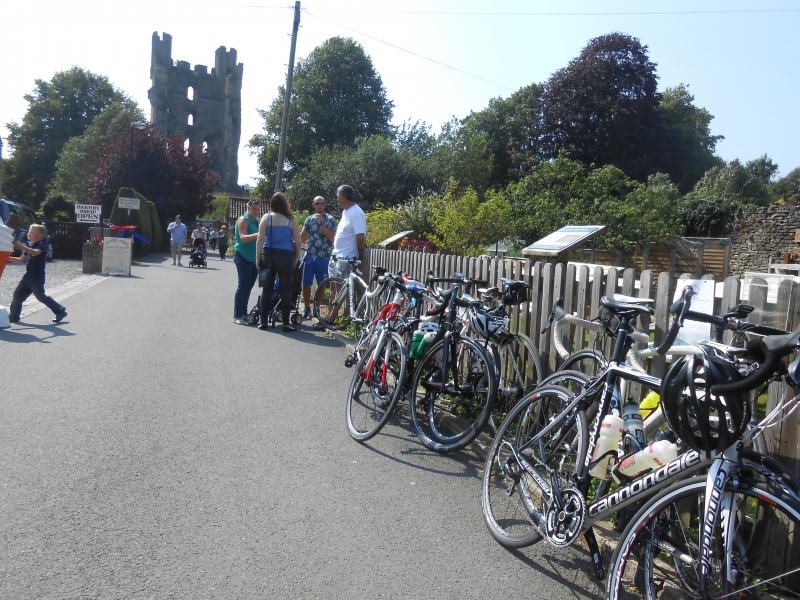