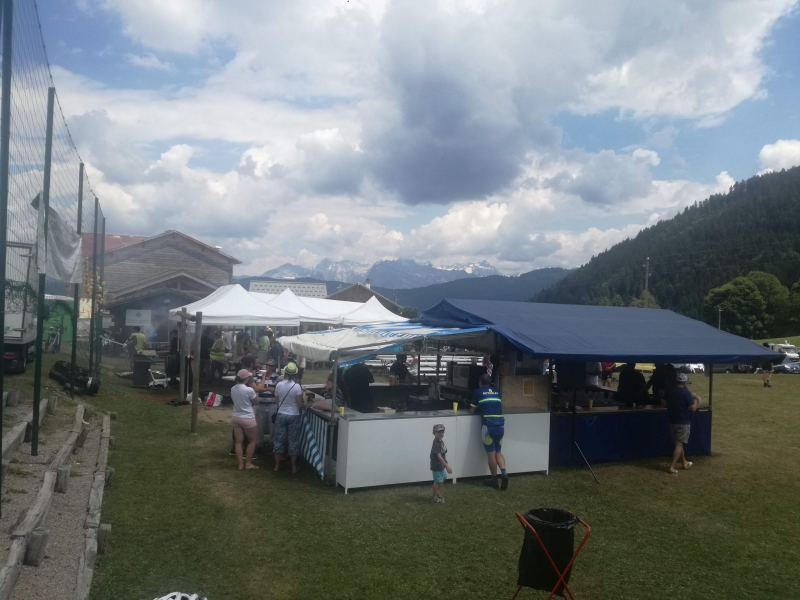 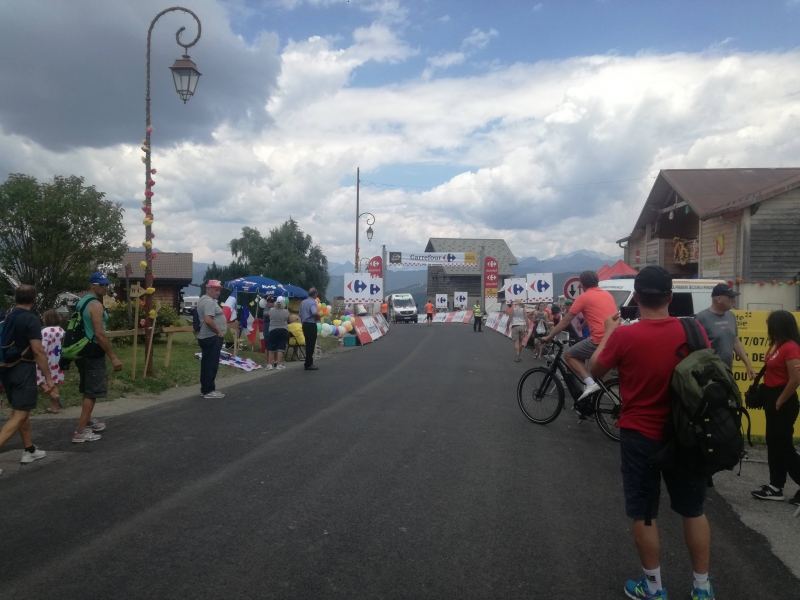 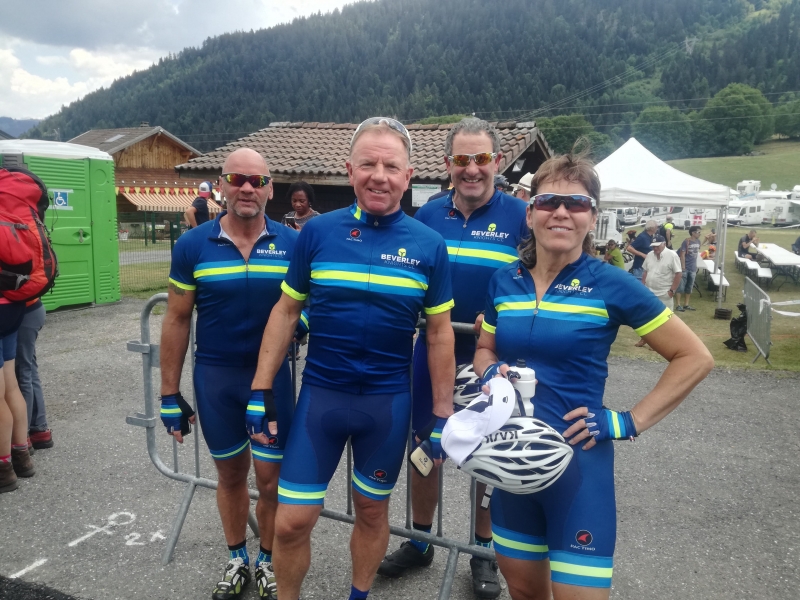 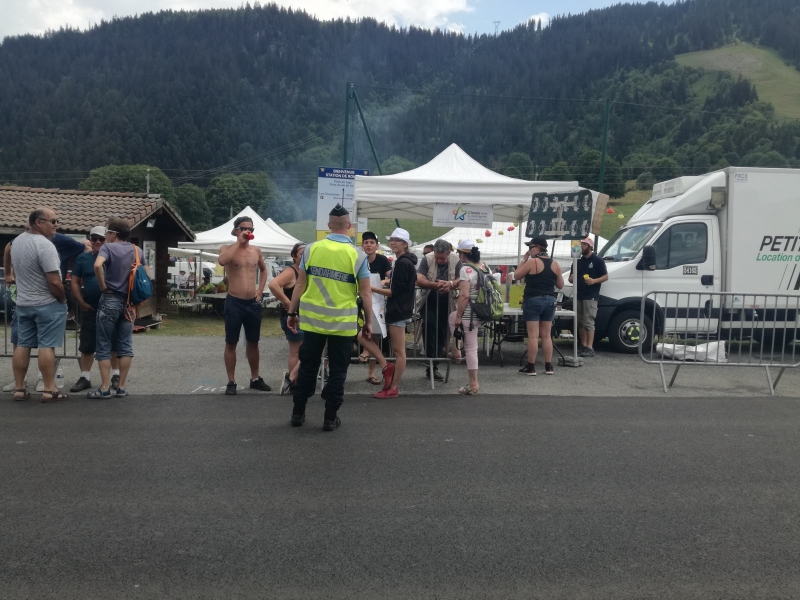 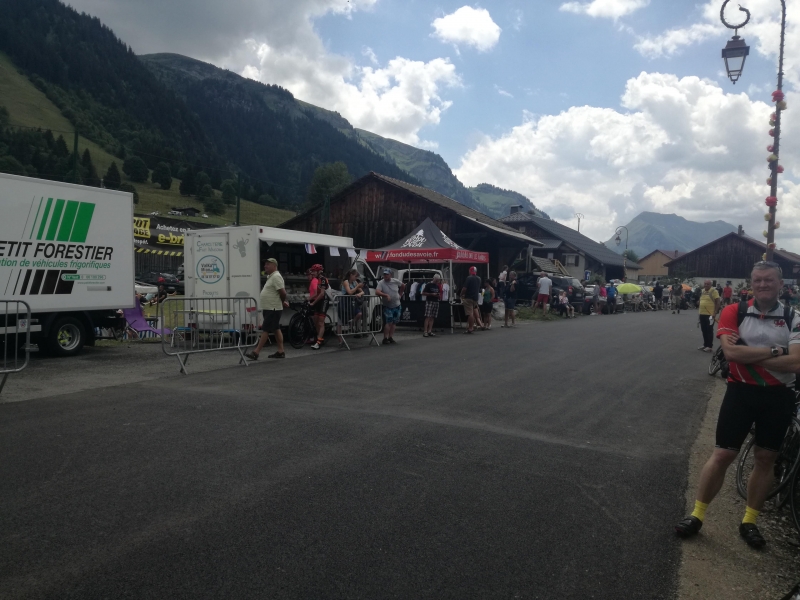 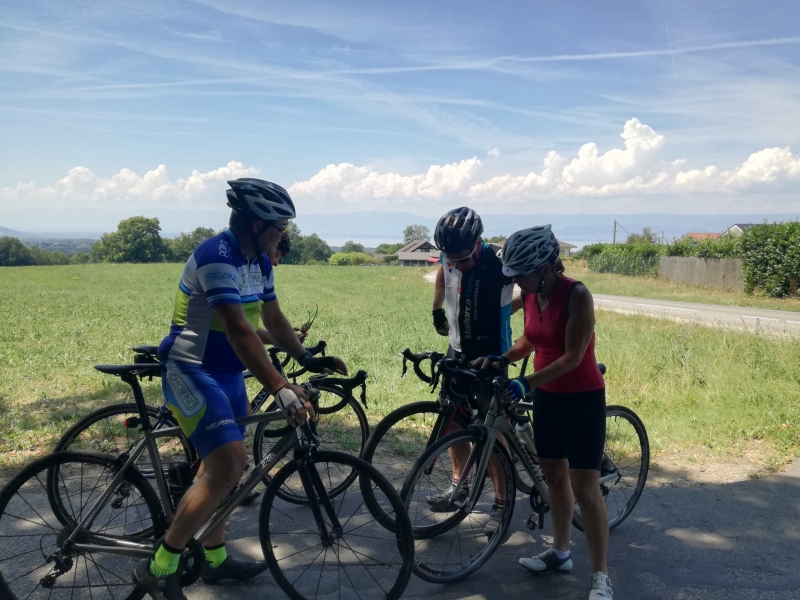 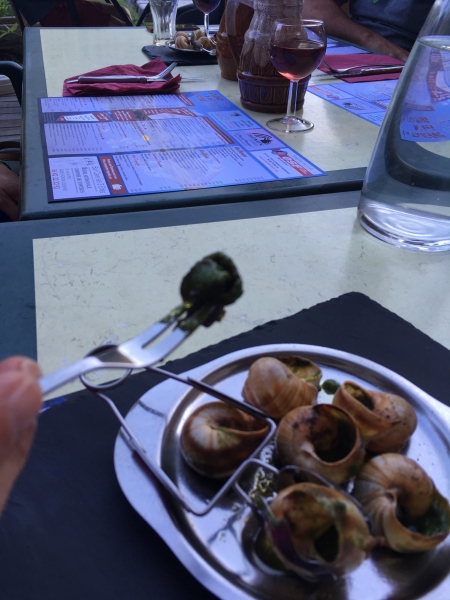 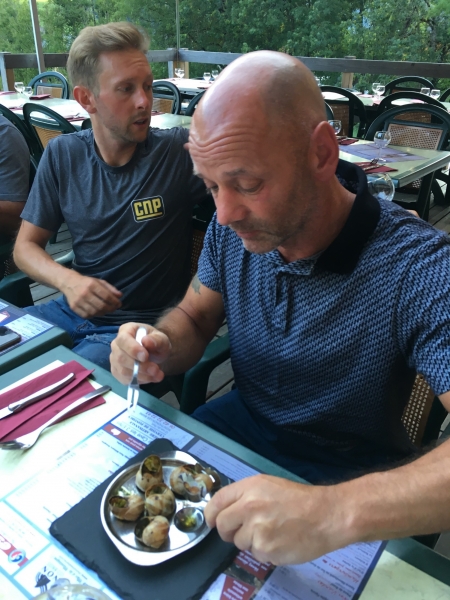 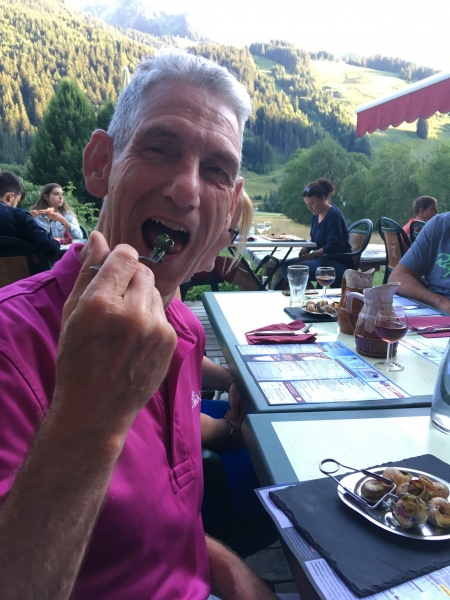 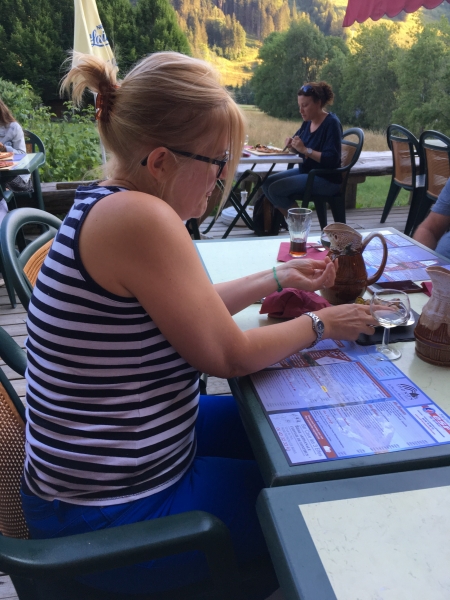 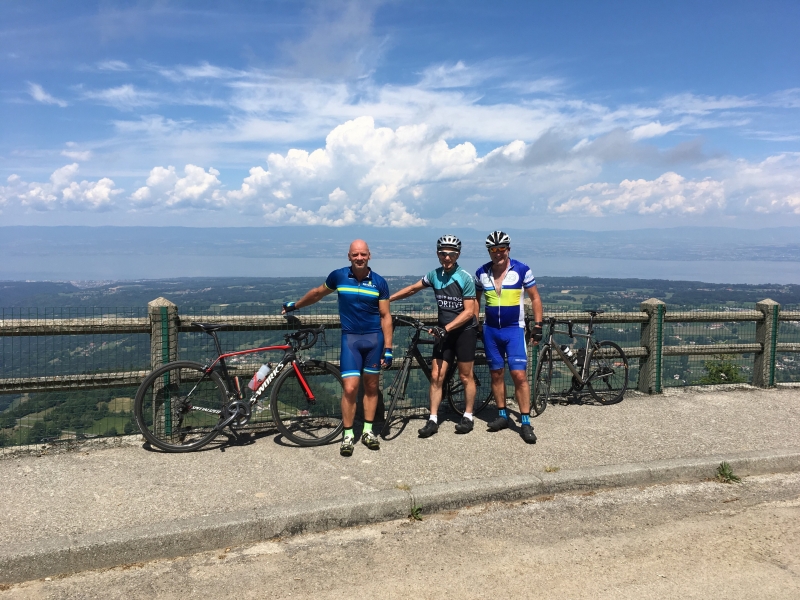 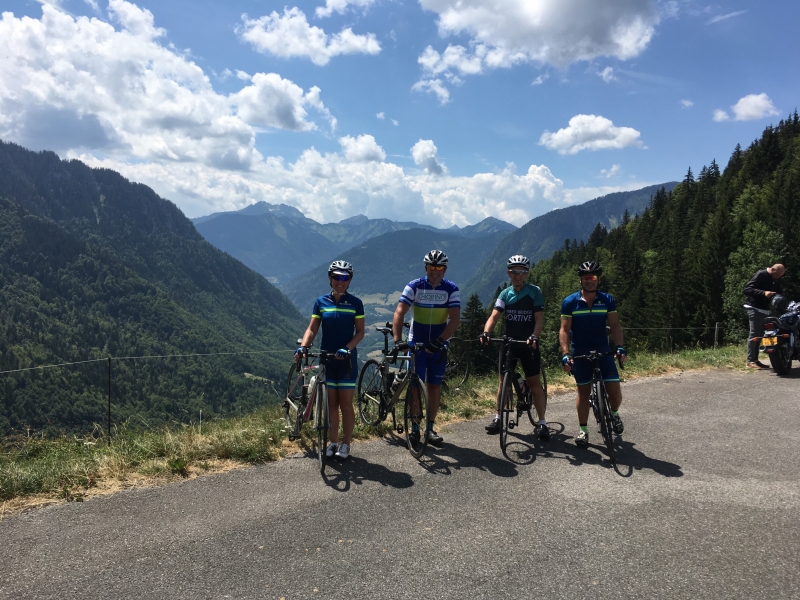 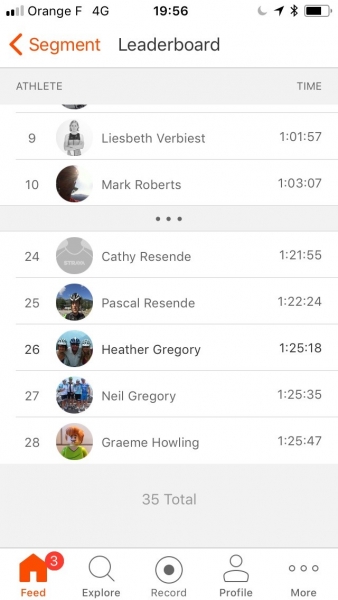 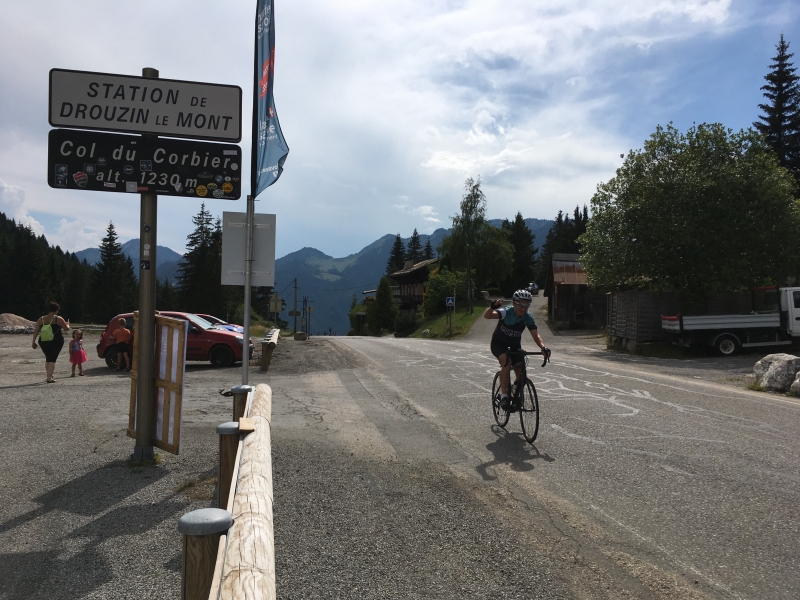 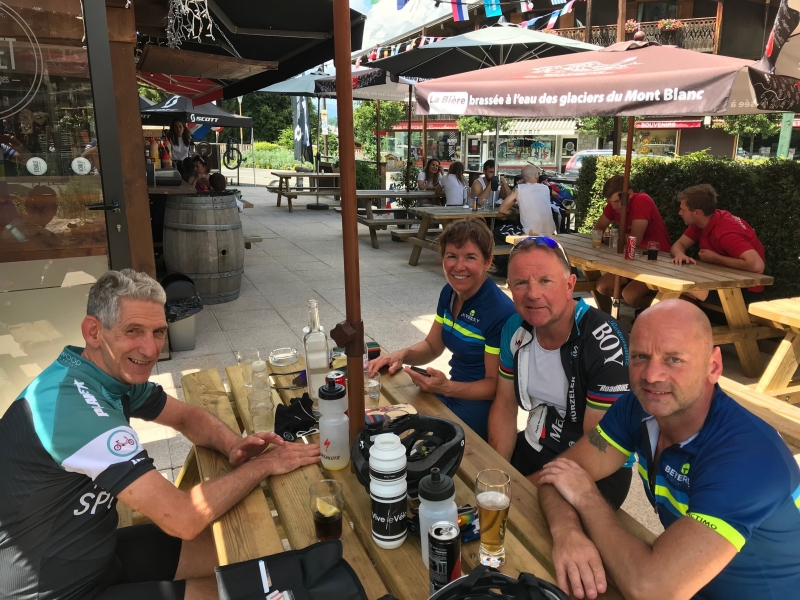 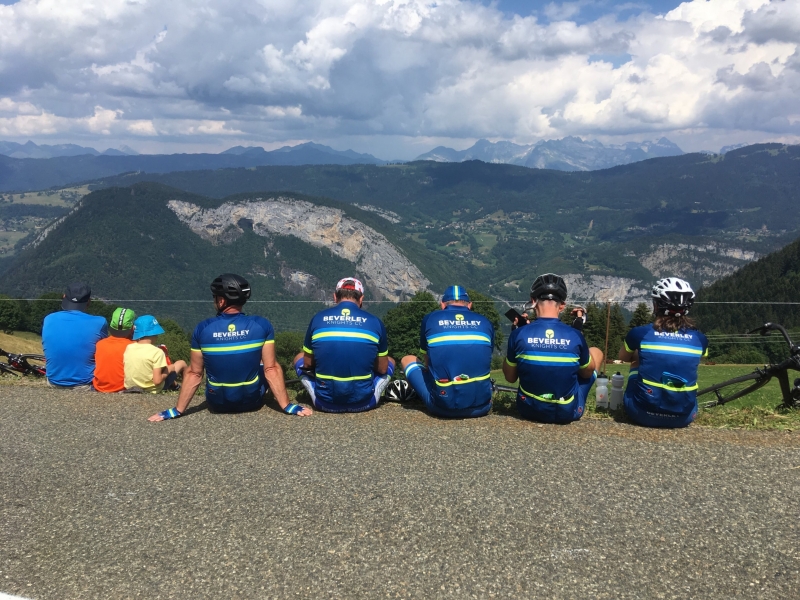 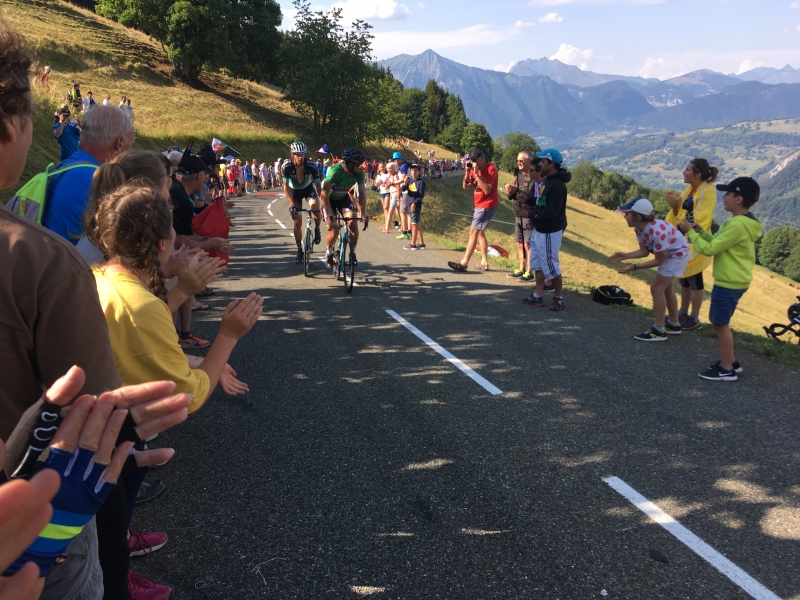 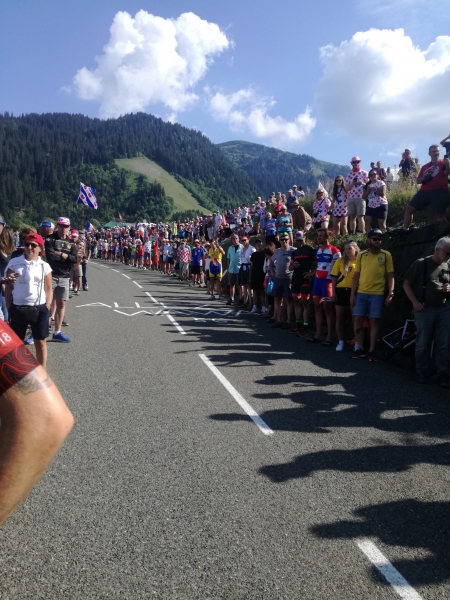 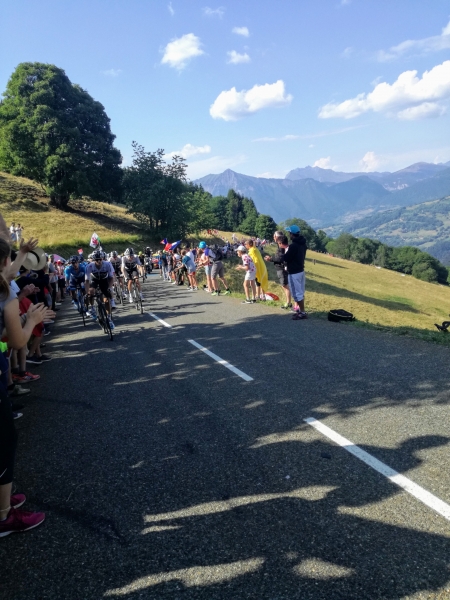 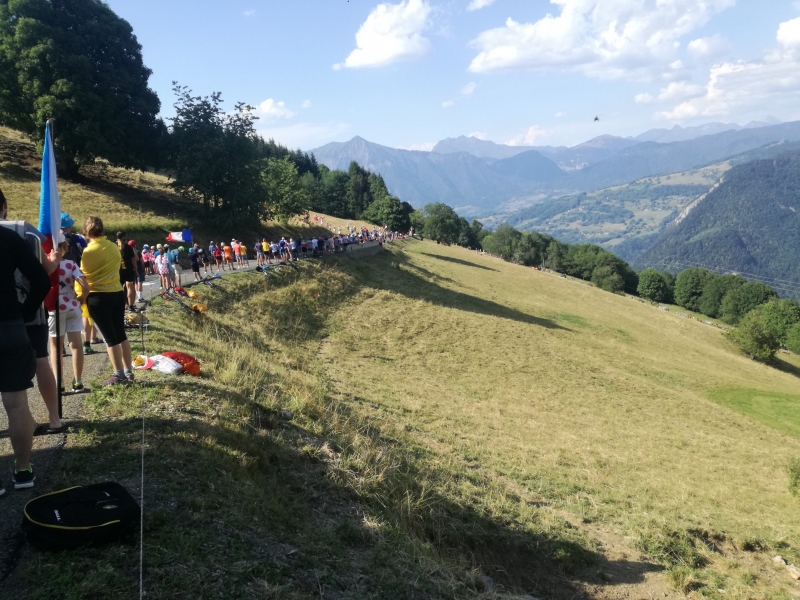 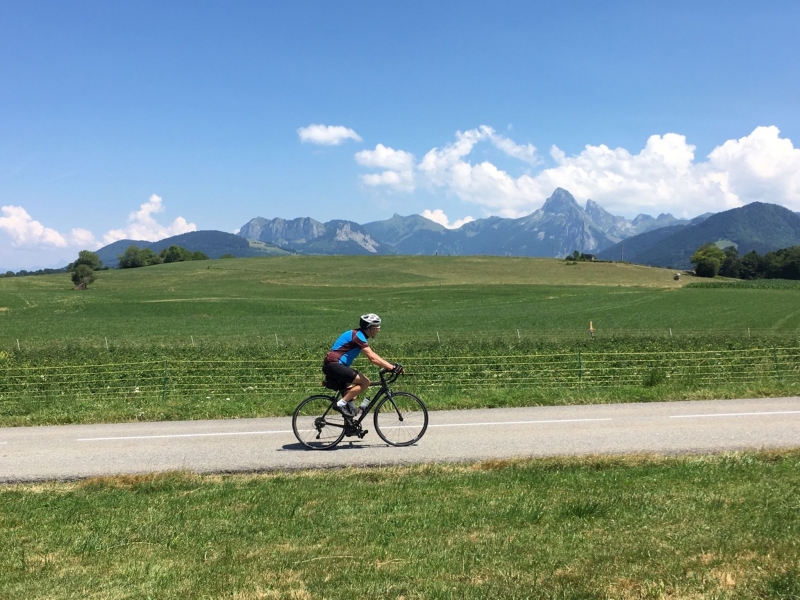 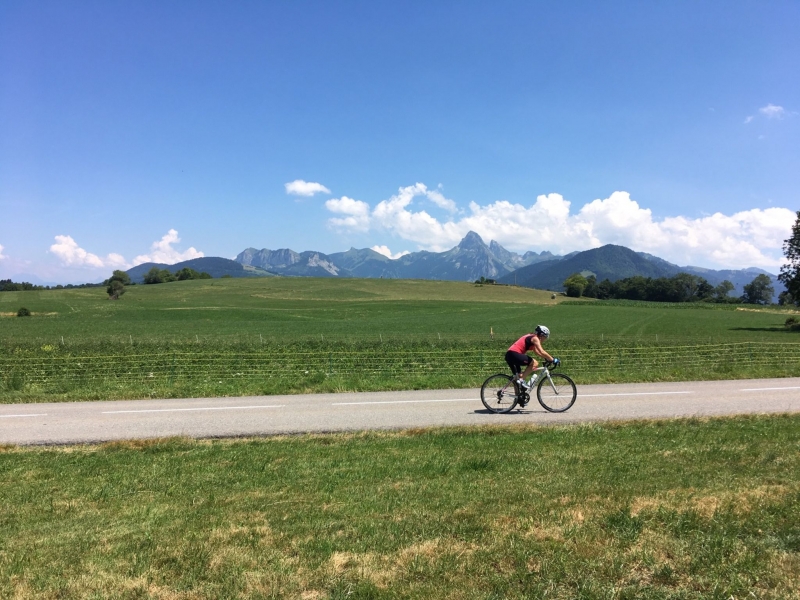 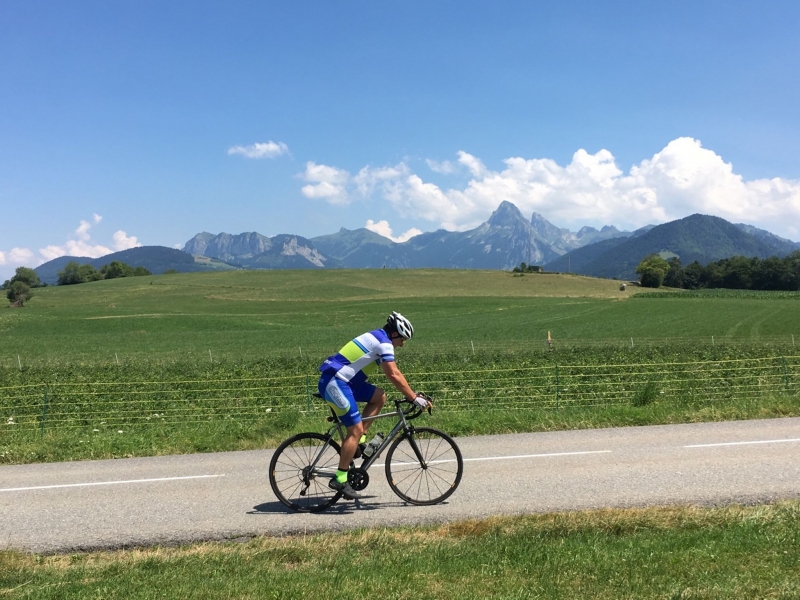 The adventure began as soon as we stepped aboard the ferry Pride of Bruges bound from Hull to Zeebrugge with Captain Pugwash, Mathew, Neil and Heather meeting up in the bar…….as you do. Following a few refreshments and a fine dinner, it was back to the bar for the evening entertainment…..BINGO!!!! No luck there with all the winnings going to another table.

Next morning we set off in a two car convoy hoping to meet up with Dave and Carol near Reims where they had stayed the night, having taken the Dover ferry to Calais. Things didn’t quite follow the script, with Dave and Carol far ahead they were delegated the job of shopping for various bits and pieces we would need during our stay at Steve & Sharrin’s hideaway.

For our first day ride we set off from a parking spot near Le Fion. After a little leg warmer along the D122 the first climb of the day was Col du Grand Taillet all the way up to Chalets de Trechauffex where we stopped to admire the view and sink espressos and grand café au laits. After retracing part of our route it was onto the long descent of La Forclaz and chance to recover from the previous efforts. Following the valley bottom we headed to Morzine where a well earned lunch was consumed in the baking sun. Our next climb was the Col du Corbier, a short effort by comparison with only 6.1km but at an average 8.3% it was not easy especially for those nursing the effects of wine and toffee vodka. Unfortunately Matt suffered a mechanical at the foot of the climb and had to abandon and wait for the “broom wagon”. I’m sure he was gutted. The long descent from Corbier back to the car  was quite exhilarating and worth all the slog up the other side.

Day 2 saw us parking at the Pied de la Plagne to follow the Route des Grande Alps category 4 climb with a sneaky 14% section thrown in for good measure. After reaching Les Gets, another wonderful sweep downhill took us to Taninges. Regrouping at the bottom, it was off along the valley with a steady upstream crawl taking us to Samoens and the base of the high category climb of Col de Joux Plane with an ascent of 868m in 10.5km. It proved to be a rather tough climb and coupled with a baking hot sun and no respite from the continuous effort pushed us all to the limit. Heather took the kudos for beating Neil to the top, much to Neil’s chagrin. A lunch stop at Le Relais de Vallee to recover and thankfully it was all downhill back to the car. Brett flew out and joined us in time for the evenings entertainment of “snail scoffing” or escargot mange as the French would say.

Day 3 was the day we joined Le Tour. Brett set off on his own way while the rest of us headed to Cluses to begin our assault on part the tour route. A short 5km run of relatively flat riding and it was straight into the high category climb of Col de Romme and average gradient of 9%. Once again the heat and unrelenting effort made a tough climb even more difficult. It was with some relief when we reached the top of the climb to find an ice cold beer waiting. Instead of continuing to the Col de Colombiere we opted for the long wait for the tour to cover the same climb. Watching the professionals made our efforts pale into insignificance, quite impressive. When all the procession cleared through it was time for us to set off in hot pursuit cursing inwardly every time we were held up by the traffic heading off the mountain. Kudos going to Matt for his daring exploits in dodging said traffic. Arriving back in Cluses we ended with a tour of the town in search of the car.

Day 4 saw Brett again set out on his own to visit Switzerland while Neil, Heather, Matt and Pugwash went on a magical mystery tour in search of views of Lake Geneva and a generally easier ride. Starting out from Vinzier we followed the Route de Grand Blanche to Bernex then to Saint-Paul-en-Chablais eventually ending up in Thollon-les-Memises where we headed for the boulangerie for lunch. The return journey saw us pass through Larringes then getting a little lost trying to find some quiet roads to take us back to Vinzier.