It’s been a bit of wash out with the weather lately, so it was a welcome dry day to greet us this morning. The sun of the previous day did not appear, however one brave Knight (Brian) still turned out in shorts despite the slight chill in the air. The brightness of his “shining armour” along with a brand new shiny bike substituted for the lack of any sunshine.

Ten knights set off on our route to Burton Constable including Russell, a potential new joiner. Mike and Chris formed a very early breakaway, by beating the lights at Hengate while the rest were held up. Once through town and onto the Weel road we were all back together again. The recent rains along with spring tides have resulted in high levels in the Hull river with some leakage onto the road. As well as dodging the puddles there was a more than normal amount of cars passing on this stretch, which may be something to do with the road works on the Hull bridge.

Turning towards Tickton we were hit by the head winds from the southeast which made really tough work for those taking their turn on the front. Following in someone’s wake was order of the day unless they come “sans mudguards”!!! On reaching the Swine road, Matt, having other commitments, left the group to head back via Long Riston while we continued to Skirlaugh. A short stretch on the main road followed before turning off on Mulberry lane towards New Ellerby. The clipper ships at the front were setting a strong pace despite the head winds and had to ease back to keep the convoy together. 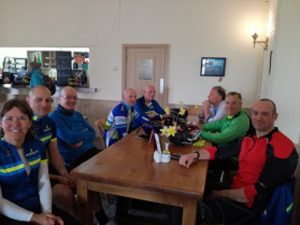 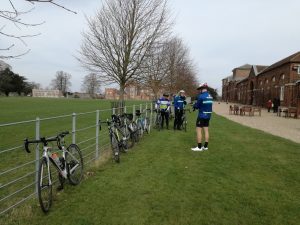 Getting ready for the off

Our refreshment stop at Burton Constable was a welcome harbour providing shelter from the wind. Fortunately it was not too busy in the café as it appears to be under new management with some “teething” problems. We did all eventually get what we’d ordered.

Suitably refuelled we were off again and looking forward to the stern winds on the way back.

We still had some rough seas to negotiate on the way to Sproatly, but then it was full steam ahead. We still met with the occasional counter wind as the road to Coniston twisted and turned. Shortly after Coniston, Neil seemed to be having a mechanical problem with his “stirrups”. New cleats may be required. The “lantern rouge” then set off in pursuit of the peloton, eventually regrouping at Swine. 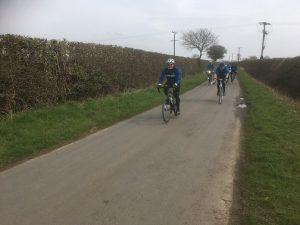 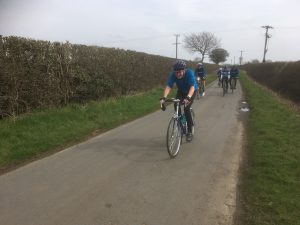 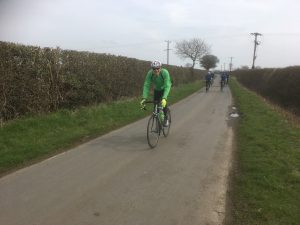 Newbie Russell having the time of his life

The return then followed the same route back to Beverley but with a helping wind making the journey seem much easier. After Tickton, the group started to break up and head off in their own directions home.