Beautiful sunshine greeted the five “retired” knights this morning. Seems others were way-laid by something called “work”. The route to North Dalton and Bainton with café stop at TJ’s suggested by Foggy (Alan) was agreed. A little excitement threatened to delay the start with a police presence on Lairgate blocking the road while they slapped handcuffs on a miscreant. However the road cleared just as we set off to head out over the Westwood on the Newbald road.

Foggy set the early pace with Smiler (Pugwash) and Compo (Jim) close behind. A stop at Manor House was called to allow Cleggy (Norman) and Howard (Raymond) to catch up. Once together, it was on to Cherry Burton and Etton. With little wind to speak of, a steady pace was maintained. The route then took us through South Dalton, Middleton-on-the-Wolds and North Dalton. With the “climbing” now mostly behind us, we followed a flattish route through Bainton and Southburn with Foggy out ahead seemingly on a mission. At Southburn we almost came a cropper with the road surface being all dug up ready for repairing.  After gingerly picking our way through, it was off to Hutton Cranswick and the café stop at TJ’s. 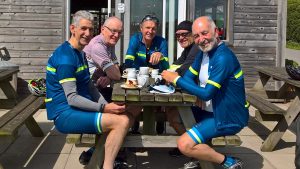 Last of the Summer Wine

Sitting in the sunshine with us “pensioners” discussing the merits of the retired lifestyle, brought to mind the theme for this ride. This was enhanced when “Marina” appeared from the café and planted a kiss on the cheek of Cleggy. Perhaps she should have gone to specsavers as I always thought Howard was the object of her affections!

The return journey saw us taking the familiar route through Bracken to South Dalton and Etton. A quick burst of power up Dalton and Etton ramp had Foggy wondering where Smiler was hiding the electric motor. Back at Cherry Burton, Foggy left the group while the others continued into Beverley before proceeding homewards.

A very enjoyable ride with great company and a good mixture of climbing early on and flatter sections later. With very light winds it felt like a head wind all the way round.