Thirteen Knights awoke early on Sunday 22nd March 2015 and drove to the Humber Bridge car park for a club ride following the Humber Bridge Sportive route (65 miles). The forecast for the day ahead looked good and there was an air of anticipation with the Knights eager to get out on the bikes for what was promised a relatively easy going fast ‘flat’ ride. 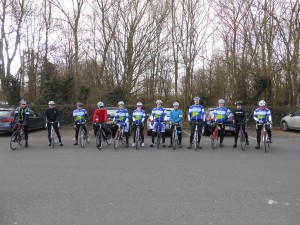 With the route successfully uploaded to two of the Knights’ Garmin computers we were off! Taking in the stunning view of the Humber with a crossing of the bridge the first of many highlights of the ride. 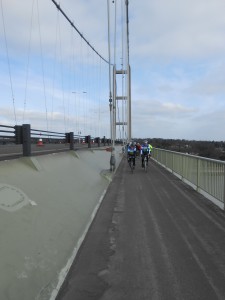 As the group gathered momentum building up the cadence, confusion quickly spread through the peloton as to which route we were taking, after a brief meeting it was decided we had gone off course however the road we had taken would eventually join back on to the route and everything would be fine. In order to join back on to the route a hill climb was required, as cyclists we like to exaggerate certain things but I’m pretty sure the ‘hill’ climb ramped up to 20% incline. When we got to the top another brief meeting was called. It turns out we had missed a right turning half way up ‘Mont Ventoux’ and that we needed to descend to join back on the route nevertheless it was a good warm up for most of us! An amazing set of roads were to follow largely flat and reminiscent of a Belgian classic with fields as far as the eye could see and a chance to gather some serious speed whilst taking in some breath taking views. 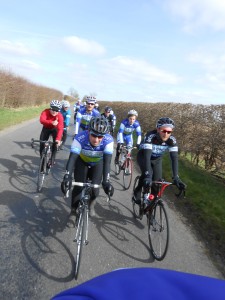 As we approached the sleepy Lincolnshire town of Caistor another hill climb was looming, with the pack split the lead group got stuck in to a climbing rhythm through Caistor to the top to stop and wait for the rest of the bunch. ‘Excuse me? Is there a cafe somewhere here?’ we asked a fellow cyclist passing by after another brief meeting over grumbles that the hill climb (23%) may have been unnecessary again. ‘Follow me!’ shouted the cyclist…..back down the hill. Again we missed the turning half way up the climb in to the market square where a wonderful little cafe hosted the club run fuel stop. As the sun grew stronger and the Knights tucked in to some lovely food it was smiles all around.

With a few layers removed it was time to set off for the remainder of the ride, what can only be described as pure bliss and a sure sign that spring was here. Rolling roads, blue skies and no wind made for great riding and it wasn’t long before the Humber Bridge was in sight (a comforting sight for most). As we made our way back to the bridge, weighing up the pro’s and cons of simply ‘bringing a map next time’ a chance to reflect on the day arose:  How incredibly lucky we are to live in this part of the country, the near perfect weather conditions and good riding meant only one thing – that 2015 is going to be a good year for everyone!