You’d be forgiven for thinking spring is finally here with twelve Knights making an appearance in glorious sunshine and light winds. Our unofficial photographer must have been trying to tell me something by cutting me out of the group photo, however made up for this gross error by having one of my own. 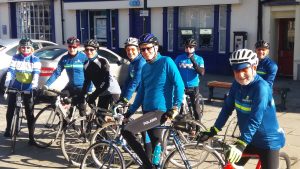 Gathering of the Crew

Not all of us made the initial start, with James having to play catch-up. There were various levels of enthusiasm for the suggested route to Pocklington / Allerthorpe so we settled on Huggate and Tibthorpe to TJs at Hutton Cranswick.

We headed out over the Westwood and on to Etton via Cherry Burton. Pugwash was the first to catch out those not yet warmed up, to form a one man breakaway with a burst of power up the Etton/Dalton ramp staying on the front until reaching Holme-on-the-Wolds. After regrouping, Raymondo was feeling the pace and decided to peel off and head for TJs via Bracken with the remainder continuing towards Middleton-on-the-Wolds. Alan then took up the “ribbon” for the run along the back straight to the junction at MOTW. On reaching Station road, the big guns James, Colin, Jim, Dave W & Mark took to the front with Pugwash just about hanging on in their wake.

Stopping to regroup at North Dalton, a nice young chap from the Star Inn approached us to enquire if we’d be interested in adding his recently acquired pub to our list of refreshment stops. With adequate space to park the bikes away from the road it might be worth considering.

It was at this point a further split in the ranks occurred. Alan, feeling after effects of lurgy, headed to TJs via Bainton along with Dave & Jenny. The “big guns” then set off towards Huggate. I don’t know who was setting the pace up the hill, I was too busy burying my head, heart & lungs in the effort to keep up. It looked like Colin and Ming the Merciless. It was with some relief when we reached the Wetwang junction. Further relief came with the wind turning abaft the beam and a cracking pace was set down the road to Tibthorpe. Strava records appearing all over the place!! It was then plain sailing through Kirkburn, Southburn and Hutton.

Arriving at TJs, we found Dave & Jenny just getting ready for the off. It was hinted that if there had been a certain young lady on duty today then our illustrious Friday leader would still be with them as well!! Various topics were discussed, including the joys of watching youngsters growing up and the problems they face and the wiles used to encourage them in the right direction!!! 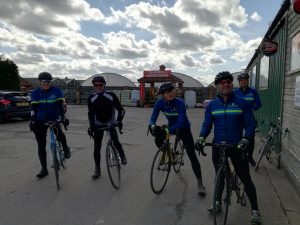 Refreshed and ready for the depart

After consumption of bacon rolls, scones and fish finger sandwich, it was time for the dash to the WC.

That pesky head wind appeared again along Burnbutts lane before we turned south towards Bracken farm, returning via South Dalton. On the South Dalton ramp, Pugwash made another power blast up the hill to take the front before being relegated to the Rear Admiral position again on the approach to Etton.  The group began to split up one by one after that, proceeding their various ways home. A superb ride in wonderful spring weather, hopefully an indication of the good days to come. Remember, only four weeks to our first Away Day