We started off a perfect ten but there is always someone to spoil the score, but more of that later. Wing Commander Raymond had suggested a minutes silence in respect of the late Alan Longmuir of Bay City Rollers fame of whom he intimated Sharrin was a big fan. Other ideas floated were the wearing of tartan “trews” or tartan scarf. In the end only Jim came out clad in black (isn’t he always?) and the minutes silence was broken by a refrain of Shang-a-Lang. According to Sharrin it was all a mistake and that she only wore a tartan scarf once and anyway was too young to have been a big fan. Just a little fan then…..

After meeting up at Manor House our route saw us heading to Walkington and on to South Cave via Bluestone Bottoms. Always a nice little heart pumper to warm up for the rest of the climb up to the top of the “clump”.

What goes up must go down, and the sweep down to South Cave does not disappoint. After regrouping it was decided that our destination would be the Lakeland Park at Allerthorpe. With the sun beginning to break through and very light winds it made for a very pleasant ride as we made our way along to North Cave and Hotham before cruising up the Cliffe road to the turn off for Harswell then Everingham. Our arrival at Allerthorpe was a welcome respite as the heat of the day started to kick in.

Scrambled eggs seemed to be a popular choice today, so much so, Admiral Neil ended up with two platefuls. Turns out something was lost in translation as he’d meant two eggs scrambled. Perhaps he was mindful of his reputation or just thinking about Alan having run out of fuel on a previous ride but the extra plate was handed over with due grace. 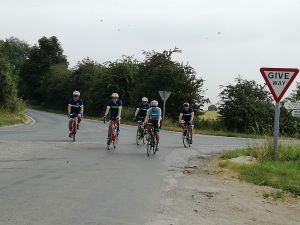 Ray, Russ, Norman, Sharrin & Neil at the top of Bluestone 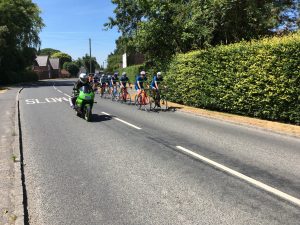 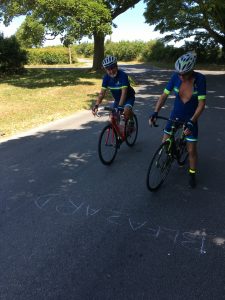 Raymond’s fan club expressing their support on the road 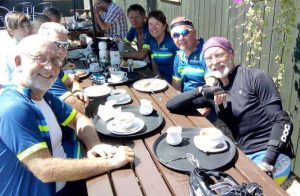 After a little jocular banter about having not replaced a borrowed inner tube, Jim decided not to continue with the group but head directly home on his own… presumably via the bike shop to collect said item ready to repay his “debts”.

The remaining nine set off towards Pocklington to return via Burnby, Londesborough, Market Weighton and the Spring road leading back to Etton. On regrouping at the top of the Dalton ramp, a discussion broke out (whisper it quietly) regarding the etiquette of hanging out the washing!!!! Who knew there were so many options. Alan had already zoomed off ahead so luckily missed out on this scintillating conversation. Mindful of the reason we were all there, it was time to get back to the serious business of finishing the ride.