The Knights annual summer  solstice ride sees our intrepid bunch heading for the coastal town of Hornsea and back for drinks and food at the Corner House. In the absence of the Admiral, it was left to Vice Admiral to rally the troops. His offer of drinks and peanuts was somewhat underwhelming but non-the-less heralded a good turn out of ten knights all in their shiny livery.  “It won’t be a particularly fast  ride” he said, “All are welcome” he said, well that notion soon disappeared into the ether. A following wind on the way out saw the pace remain high throughout.

Our route took us out along the Weel road to Tickton. The crossing onto the cycle path was like a load of rats abandoning ship with some crossing early, some taking to the road while others kept to the cycle path. At Routh we headed south on a “broad reach” until Beningholme lane where we headed east again before turning north to Arnold then through the underpass to Long Riston. Maintaining a speed around 20-23 mph, there was not a lot of chatter as we passed through Little and Great Hatfield on the way to Mappleton. On hitting the main road heading north on a “close reach”, there was still no let up in the pace as we raced into Hornsea bound for a photo opportunity at the sea front. For some it was a chance of “relief” before setting off on the return journey. 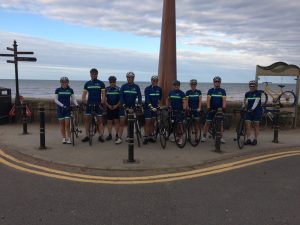 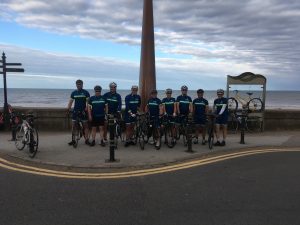 After leaving Hornsea it was off on the Bewholme road past the Honeysuckle farm. Despite turning into the wind along the Catfoss road we still maintained around 21mph all the way to Brandesburton. The smell of the beer and peanuts must have wafted in the wind as we continued to push hard and with a final flourish of 23mph along Norwood our destination was soon in sight. Total time taken from Market Cross and back to Corner House came in at just under 2 hours. Kudos to all and no-one was dropped.