The great orange ball in the sky was a welcome sight again this morning following on from the warmest April day on record. It was off with the longs and out with the shorts, off with the mudguards out with the summer steeds. We were determined to make the most of this hot air from Africa, however as we say in Scotland “ne’er cast a cloot till May is oot”.

Ten knights turned out for Raymond’s smorgasbord of routes, eventually deciding on the longer hillier journey to Millington via Middleton on the Wolds and Huggate. Shortly before Etton, it was decided instead to do the clockwise route via Goodmanham and Londesborough unfortunately not everyone got the message. The fleet split up when Admiral Neil ran out of puff in the front tyre on the way up Etton ramp. The scouting party failed to hear the shout and continued merrily on their way while the vanguard remained to provide an audience for the repair. 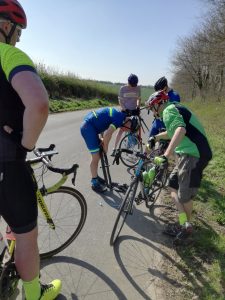 By this time, the fleet was like the Spanish Armada, scattered to the four points of the compass. Sharrin did manage to relay the message to some and with mobile phones to the rescue, a rendezvous point was agreed for Kiplingcotes crossroads.

When all were back together with the exception of Corporal Jones who’d zoomed ahead, it was off to Goodmanham. Don’t panic Mr Gregory, we’ll catch up with him at Millington! The head winds continued to hamper our progress and if that wasn’t enough, Intake Hill soon appeared on the horizon presenting the first lung buster climb. A welcome relief followed and a regrouping on Burnby lane ready for the photoshoot. 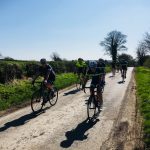 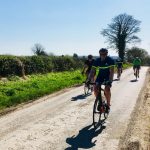 Chris working up a appetite for the café stop 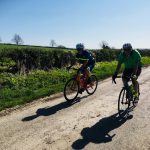 Newbie Russel and Oldie Ray enjoying the sun on their backs

Heather and Sharrin, like a pair of bowsprits, led the fleet on the long sweep down to Burnby. From there it was on to Nunburnholme and Kilnwick Percy. Turning off the B1246 towards the golf course, some were caught out in the wrong gear on the initial ramp up before the long drag along to Millington.

Arriving at Rambler’s Rest, Alan was already moored up enjoying the sunshine. It was a real treat to be sat outside for our refreshments. 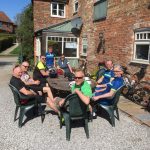 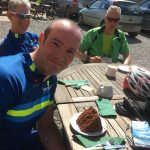 Chris and a well deserved chocolate

Bunkers on board, sails up and wind on the stern, it was time to set off along Millington Pastures. The lead being taken by Alan closely followed by David W, Pugwash and Shaun. At the final ramp up, Chopper put in a bit of a sprint to finish first to the top. Regrouping once again, Raymond said he’d had a chain malfunction on the way up. “Kipper me capstans!”, not a good time to “let go anchor”. 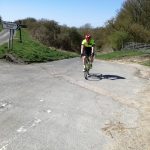 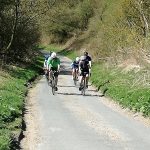 Ready for the last push to the top 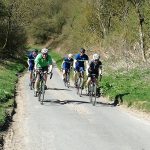 The race to the top 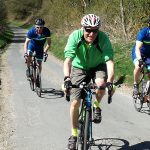 Russel leading the group out of the Dale

Leaving Huggate with full wind in the sails it was off at a gallop to Tibthorpe. It was an exhilarating run with Alan taking the kudos despite the best efforts of Pugwash. Another chain malfunction occurred during this section with Sharrin being the victim this time.

A much gentler pace ensued after Tibthorpe, taking us back to Beverley through Bracken, Etton and Cherry Burton. Another superb ride with weather to match. Roll on the real summer.