A good turn out of Knights for our first “Away Day” of 2018. Fourteen met at Market Cross at the earlier start time of 2 bells of the forenoon watch. Jonathon was only accompanying us until Newport before returning home. Another late re-entry was Chopper, having previously “called off” only to countermanded almost immediately by Jenny. You WILL go to the ball!!!

With southerly winds forecast for most of the day, it was head winds right from the off. The route taking us over the Westwood to the Newbald road then down to Walkington and up to High Hunsley on the Middlehowe road. Just a nice little climb to get the legs and lungs warmed up. Once down Trundlegate, it was on to Hotham and North Cave. The lead group missed the turn to North Cave but were flagged down in time before they headed off to Common Hill.

Despite the head winds a good pace was set from North Cave to Newport. On the way in to Newport, there appeared to be an organised cycle event in progress. I’m sure they were all impressed by our professional looking peloton flying by. Once through Newport it was on to the quieter roads following alongside the Ouse river to Faxfleet and Blacktoft where the fleet stopped to regroup after being somewhat stretched out. Unfortunately for Sharrin, there seemed to be a “clippy pedal” moment resulting her going to ground with battle wounds to show for her effort. 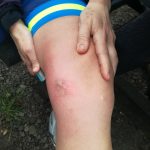 Our route then continued along the Ouse through Yokefleet, Laxton, Howdendyke and Howden before turning south towards Goole. Passing Goole docks then over the Dutch river we arrived at our interim stop at the co-op. A welcome break to recover and refuel.

The next section saw us wind assisted under full sail following the south side of the Ouse through Swinefleet and Reedness.  On passing Blacktoft Sands nature reserve we had a change of road direction with a sudden broadside of wind from the starboard bow, causing a few wobbly moments. Head winds continued then as we proceeded south again bound for Keadby following the west side of the river Trent. Once across Keadby bridge it was back to full sail with the wind on the stern. Now following the east side of the Trent, we passed through Flixborough and Burton-upon-Stather before our café stop at Alkborough.

The weather remained pleasant, so we were able to sit outside. Now I had heard that our Admiral has a reputation as a trencherman, however I didn’t expect it to extend to scoffing other people’s grub!!. Some blame may be laid at the hands of the young serving girl not knowing which order she was bringing out. The forecast rain did appear at this time but sheltered under table brollies it didn’t dampen our little tea party. Some did put on arm warmers or rain jackets when the temperature dropped a touch, but quickly removed again once underway.

When ready to set off there was time for a fleet photo before the return journey to Beverley. On leaving the café, Sharrin seemed to have one of those days, unable to tell her droite from her gauche shouting car right only for it to appear from the left. Once again running before the wind, our route followed the south side of the Humber river passing West Halton and the first real climb of the day up to Top road. From there it was slightly downhill through to South Ferriby with a cracking pace set. It was then that we faced our second climb of the day at Ferriby hill and rising all the way to our turn off at Gravel Pit road. Once regrouped, it was off for the long sweep down to Ings lane then up to the Humber bridge.

The final part of our return saw us passing through Hessle up to Tranby lane and on towards Swanland before turning up Greenstiles lane then Occupation lane. The next climb came at Riplingham road and with so many miles already covered each little incline was turning into a mini mountain. Another flat run along Eppleworth road then a final little dig up Skidby hill saw the end in sight.

An extremely enjoyable ride overall and for me a nostalgic view of places visited while working as a Humber pilot.