Weather forecasts of gloom and doom from earlier in the week did not come to fruition today. The sky was grey and a there was a distinct chill in the air as the six cruisers gathered at Market Cross. HMS Dreadnought with Pugwash onboard, was first to arrive followed by newcomer HMS Hood with Olivier. Next to appear over the horizon was Stephen in HMS Courageous and Sharrin with HMS Queen Mary. Finally making the convoy was HMS Indefatigable Dave W and HMS Renown Andy. Signal greetings were passed all round with HMS Courageous adding that he and HMS Queen Mary were required for further duties in the afternoon and had to return to base by 1230.  The suggestion of a trip to the far eastern port of Hornsea was quickly agreed.

The convoy set off along Norwood at cruising speed until reaching the Swinemoor roundabout. The option of the narrower sea-lane to the south of the main strait was ignored with HMS Indefatigable acting as flag ship and moving up to battle speed until reaching Tickton. Once safely on the northern Traffic Separation Scheme the convoy returned to cruising speed. At Routh, the convoy turned south towards Meaux, however not without one of the enemy vessels blasting their horn and giving us all a broadside. HMS Indefatigable continued to set the pace until reaching the junction at Kidhill lane where HMS Renown took up the running. He was having so much fun being on the front that his pace picked up to “Full Gas” and was starting to create a gap with the convoy becoming strung out behind.  Eventually he relented and HMS Dreadnought took over as flag ship till reaching Arnold.

While zig-zagging our way around the quiet country roads towards Hatfield, some “back seat drivers” cast aspersion on the navigating abilities of HMS Dreadnought and HMS Renown when their hand signals from behind failed to alert said vessels prior to the junction. Having a following wind and smooth waters, the pace remained high and the convoy soon found themselves at Mappleton and on to the busy waterway leading to Hornsea. Once again, the aptly named HMS Indefatigable took to the front maintaining a steady 20 knots until arriving at the bunker port of Hornsea Mere café. 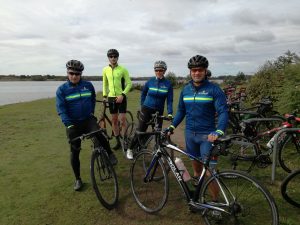 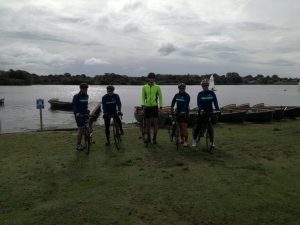 Lined up ready for fleet inspection

On arriving at the anchorage, HMS Indefatigable admitted it was his first call to this particular port. By this time the sun had come out to greet the fleet along with a myriad of other small sailing vessels. With cruisers securely moored, the respective captains repaired ashore to take on enough fuel for the return journey. It was a timely arrival, as another fleet arrived in port immediately after muttering something about saving some bacon sarnies. Mindful of the need to get back, the fleet was soon back on the road. Heading out of Hornsea and up passed the Honeysuckle Farm, there was some jockeying for position before settling into a nice orderly phalanx once more.

The return route saw the fleet passing through Bewholme and Catfoss before reaching Brandesburton. On the way through this section, a fleet of tractors some 20 strong were spotted heading in the opposite direction. Part of the Leven Tractor Run. I’m sure they would have been impressed by the speed and “colours” displayed by our little fleet as we zoomed passed.

At the Whitecross roundabout it was back onto the Tickton Traffic Separation Scheme, still led by HMS Indefatigable. Part way along this section, he finally showed some signs of having spent the lion’s share at the front and dropped back towards the rear of the convoy. A superb fast ride, just what was needed to warm things up in the early autumnal chill.