Nothing like a bit of sunshine and light winds to bring all the knights out to play. “All right you horrible little softies” cried drill sergeant Raymond, “Seeing as you don’t like wind, let’s see how you get on with a few hills”. “We can head for Huggate, Huggate or Huggate” he yelled with a hint of a smirk on his face. “From there, we will head to Warter, Londesborough and Goodmanham”. “Yes sir!” responded all ten knights on parade at Manor House. 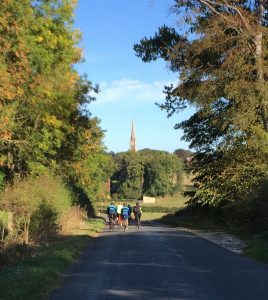 The squad set off in good spirits, catching up with those who’d not been seen for a while. The route march, saw us passing through Etton where the group had to wait for the rear guard to catch up, having been held up by traffic  at an earlier junction. The first climb of the day came on the way to Holme-on-the-Wolds, before heading into the wind towards Middleton-on-the-Wolds. Next up was the long seemingly never ending climb to North Dalton and Huggate, which saw the group becoming strung out. The gathering at the top of the climb was said to be more like a “mothers meeting” with everyone chatting away and no-one in any hurry to continue.

The next section was a chance to recover and enjoy the thrill of the downhill into Warter. Neil took the opportunity to take some photographs by the duck pond, much 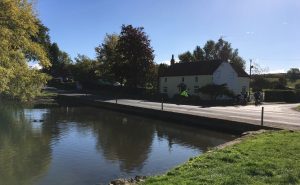 Mad dogs at Warter and they weren’t the cyclists

to the chagrin of two dogs in a nearby garden, who let rip with enough noise to wake the whole neighbourhood. Photoshoot over and it was time for the main climb up to Nunburnholme top. A few mutterings were heard at the bottom wondering why anyone would sign up for such torture. In the words of Corporal Jones “Some don’t like it up ’em hills”.

On the way down to Londesborough, we came across an army of children some 500 strong, many in fancy dress, out from their barracks at Market Weighton School on a 30 mile hike to raise funds for charity. 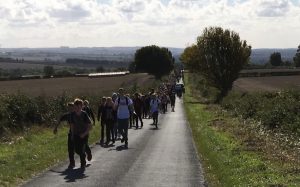 Market Weighton school turn out to cheer the knights

Heading in the same direction as the knights was a “Sherman tank” with a bull headed “commander” on board. Instead of enjoying the moment and showing some patience, he decided to take issue with the squadron leaders for having the temerity to block his passage and continued to harangue everyone even after the road had cleared ahead of him. Eventually some of our group pointed out the error of his ways only to have him to turn his vitriol towards us before roaring off into the distance.

Next challenge was Intake hill leading us towards Market Weighton and Goodmanham and chance for a repast at the Fiddle Drill café. Despite the bright sunshine, there was a chill in the air so we decided to commandeer some tables inside and rearrange the furniture to accommodate our number. Jim showed his selective hearing skills by claiming a black coffee which had been destined for Colin. Perhaps he’s out to take over from Neil as “trencherman extraordinaire”, mind you I think those with bacon sandwiches would be safe. 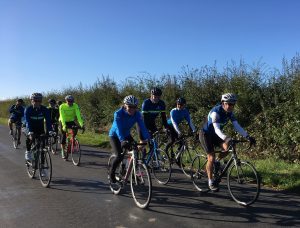 The Captain following behind contemplating the theme for todays ride

The great Raymondo leading the way on next years sprint section

Our return route saw us taking the Spring road returning to Etton. At the junction at the top of Etton ramp, a discussion ensued regarding the merits of using “Etton Mess” strava section for next years sprint challenge. All too soon it was time for everyone to head home. Wonderful weather, fantastic company and everyone looking forward to the next outing.