Looks like our brief spell of summer weather is rapidly coming to an end. How many layers do we require today? I think I had three rig changes before settling on base layer and top. It appears that most were similarly attired.  Among the dozen assembled knights, was Paul a new member introduced by “Stormin” Norman, recently returned from his winter hibernation in sunnier climes.

With route master Raymond in absentia, Rear Admiral Heather proposed today’s route, a reverse of Thursday night’s ride. Leading us out over the Westwood on the Newbald road, Heather bagged herself another “Queen of the Mountains” Strava segment. While regrouping at Walkington stables, Mike’s ride was rudely interrupted by a call from work. Never mind only 6 weeks to go. How will they ever manage without you?

Turning into Burton Gates, we were then exposed to a light South-South-Easterly fine on the port bow. At Walkington, we took the back road towards our main climb of the day, Bluestone Bottoms. Pirate Jim set off at the front on a forward recon followed by Corporal Jones and R.A. Heather. Captain Pugwash briefly jumped into second place before being pegged back into fourth prior to regrouping at White Gap Lane crossroads.

Next on the horizon was Comberdale hill with Alan taking up the pace making. Half way up, the wind turned more towards the port beam. Once over the top it was on to the long sweep down into South Cave. When all together again, it was full sail including spinnakers with wind now on the port quarter. Master Mate Mike and Captain Pugwash took up the pace setting through to North Cave. 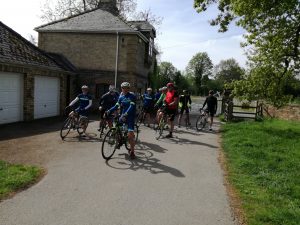 Taking in the scenery in Hotham park

From there we took the path through Hotham park and Common hill to Cliffe road. On a lovely smooth sea and wind now on the starboard quarter the pace to Market Weighton was high before grinding to a halt at the A1079 junction waiting for a break in the traffic before crossing into town. “Nautical Nitwits” don’t they know steam gives way to sail!!

The next climb facing us was up the Goodmanham road. Alan once again made the initial dash for the café but having expended a lot of energy leading along Cliffe road, was pipped at the post by Mike. On taking the refreshment orders names were written down, however “Pugwash” had been written down as bogwash causing some hilarity at the captain’s table.

The return journey continued up the Goodmanham road to Kiplingcotes race course road where we then had an adverse wind direction for the remainder of the route through Etton and Cherry Burton. Another superb ride with wonderful company.