Beautiful unbroken sunshine greeted the “magnificent” seven knights assembled at Market Cross. The call had gone out, some bacon sandwiches, scones and cakes were in need of rescue at the Fiddle Drill. After deciding the best route, we mounted our steeds and headed out over the Westwood with  James Coburn (“Britt” Alan) taking the initial lead out. Heading up the cote de Newbald road, Brad Dexter (“Harry Luck” Pugwash) took up the running. At the 1079 junction it was the turn of Horst Buchholz (“Chico” Matt) who made a dash over the road ahead of a convoy of cars. He was followed by Steve McQueen (“Vin Tanner” Stephen) in setting the pace heading into Cherry Burton.

At the Etton road junction, we were ambushed by the notorious Wilson gang (David, Jenny & sons) who decided to link up with us to Huggate. Continuing through Etton and South Dalton the pace setters were led by Robert Vaughan (“Lee” Mark). With a generally light south easterly wind the tempo was high and steady right through to Middleton-on-the-Wolds. It was then on to the climb up to North Dalton with Charles Bronson (“Bernardo O’Reilly” Jim) coming to the fore.

The climbing continued all the way to Huggate with “Lee” setting a cracking pace resulting in the band of knights becoming strung out. 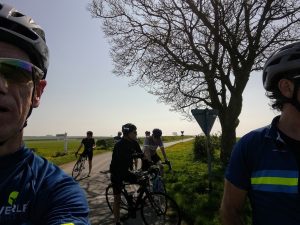 After regrouping at the Wetwang junction, the Wilson gang took their leave and headed off east while the “magnificent seven” continued west for the Warter road.

The downhill blast into Warter was a welcome but brief respite before the next climb up Bailey lane to Nunburnholme top. This time it was “Bernardo” who led the charge to the top. 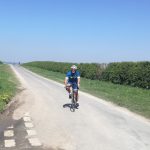 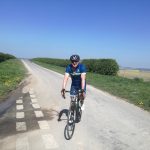 Stephen at top of Bailey Lane 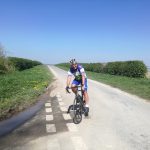 Matt bringing up the rear

A regroup at the top gave the gang a chance to recover before the long sweep down into Londesborough with Yul Brynner (“Chris Adams” Mike) now joining the vanguard. The next obstacle was Intake hill with “Lee” and “Harry Luck” at the front closely followed by “Chico” who jumped into the lead at the A614 roundabout with another sneaky dash ahead of the car convoy.

One final climb up the Goodmanham road saw “Britt” take honours for the dash to the café. 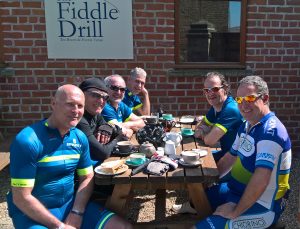 6 of the Magnificent Seven rescuing our fare

The pleasant summery conditions prevailed allowing us to dine al fresco and a chance to rest and refuel. Our mission completed, it was time to return home. Soon after leaving the Fiddle Drill, “Chris Adams” steed went lame in the rear. A quick blast of air was hoped to be enough to get him home rather than performing routine surgery. Kudos go to “Vin Tanner” who shadowed “Chris Adams” until reaching Etton where he then departed the gang bound for Driffield. The remainder continuing to Cherry Burton with gang members peeling off at various locations heading for home. A magnificent ride with weather and company to match.