The weather forecast and outside commitments put paid to the ambitions of some to join the Sunday club ride. Encouraged by the redoubtable Dogtanian (Pug) the three Muskehounds, Athos (Brian), Aramis (Paul) and Porthos (Colin) reported for duty at Market Cross at the later time of 10am.

Monsieur de Treville set us the task of chasing down the power hungry Cardinal Richelieu, last reported heading for South Cave, North Cave and Howden. Setting out over the Westwood, the chase was on with Dogtanian taking the initial lead and Athos taking over at the top of the climb. The first drops of rain (more like mist in suspension really) appeared when heading down into Walkington, however did not dampen the spirits of the King’s Guards and passed after a few minutes.

Next obstacle for the Muskehounds was the mighty Bluestone Bottoms, led up by Porthos then Dogtanian to the base camp at Comberdale Hill. Porthos, making another strong showing, continued to set the pace to the top of the “clump”. It was about this time the skies began to look a bit ominous in the direction we were heading, however undeterred continued down into South Cave. Athos and Aramis now feeling somewhat doubtful about the little bit of dampness on the road and in the air, proceeded gingerly down through the trees, probably wishing they could call into the Little Wold Vineyard instead.

At South Cave, news reached the Muskehounds that Richelieu had now been spotted heading from North Cave to Hotham and Newbald. Nothing to do with brief shower, as Porthos said “You’re not a cyclist if you don’t get damp occasionally”. By the time we reached North Cave the sun had returned making for very pleasant riding conditions. Onward then to Hotham with the wind at our tails we were soon at Newbald where the elusive target was reported to be heading for TJ’s. Swords at the ready, it was time for Stoneknowe hill challenge with Athos showing an impressive skill and speed to lead the group to the top. 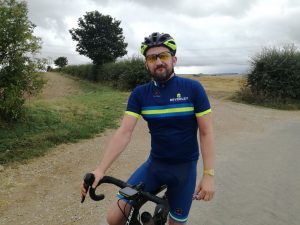 Paul on “top of the world” 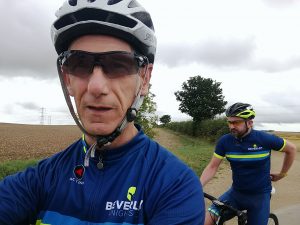 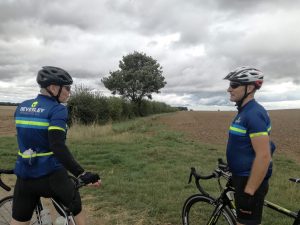 At Gardham a brief sighting of the Cardinal (AKA Brett) spurred the Muskehounds to full gallop to try and close the gap on the Sprint Challenge. Maybe next time. At South Dalton we took the Mere Lane to the Bracken road and with a good tail wind the pace was high. Porthos, needing to return early, abandoned at the top of Bracken ascent while the others continued to the café stop at TJ’s. Milady (Rosie) served up our refreshments making no mention of the incident with Widimer (Jim) so I guess all is forgiven.

On leaving the café, the hounds passed through Hutton Cranswick to take Sheepman lane to Watton, Kilnwick and Lockington before returning home on the main road to Molescroft.