Now then boys, it’s a little windy this morning and the bright sunshine isn’t quite strong enough to provide the heat we have experienced of late, so make sure you wrap up warm and choose a route to keep the wind at your back. Some of your friends have decided to give it a miss and there will be only five of you meeting at Market Cross today.

“Let’s head to Londesborough, Warter and Huggate” said Alan, quickly adding “we can then head for Tibthorpe and have tea at TJ’s”. “Yes”, chorused the others, “sounds like a good plan”. The five friends mounted their hobby horses and set off for their adventure.  A split in the group appeared right from the off as the traffic lights changed to red after the leading two Alan and Mikey had passed, leaving little Jimmy, Russ and their faithful dog Pug sulking in the rear.

The adventure could easily have come to an early end, when a parked car decided to pull out on Pasture Lane almost side swiping Russ and leaving no room for Pug except to do a “Tom & Jerry” braking manoeuvre. It was then off over the Westwood and the boys all came back together again at the Coppleflat Lane junction. On reaching the A1079 junction at Bishop Burton and carefully following their mummy’s advice about the “green cross code”, the five friends crossed gingerly over to the Cherry Burton road.

Once reaching Etton, it was head down time to reduce the effects of the adverse wind. At the top of Etton/Dalton ramp, Alan suggested a slight change to the normal route by heading to Goodmanham via the Enthorpe road. “O…K….” said Jimmy with a glazed and confused look appearing on his face. “Where’s that then?” he asked. “Just follow the rest of us, you’ll recognize it when you get there” offered Pug. Given the state of the Spring Road this was a good alternative with a lovely downhill sweep into Goodmanham to make up for all the climbing.

Next up was the long drag to Londesborough then to Nunburnholme top with Alan taking the lead most of the way. At the top the boys stopped to admire the fantastic view…. and recover from the climbing effort. Mikey advised his friends that his “mummy” had said he had to be home early so with a cheery wave he set off to find his own way home, while the rest continued the journey to Warter and Huggate. With the main climbs completed and the wind behind, it was off at a gallop to Tibthorpe, Southburn and picnic at TJ’s. 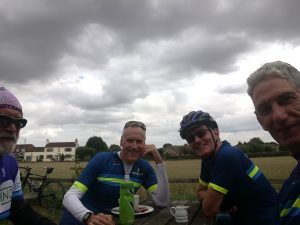 Is that a wasp you’ve swallowed Jim?

The previous bad behaviour of little Jimmy went unnoticed this time, as the object of his faux pas was not in attendance and he was “allowed” to sit with the others. The trouble with picnics is wasps seem to like this form of al fresco dining too. “I’ve been reading up about Bees” said Alan, “Wasps evolved from Bees but Bees are vegetarian and wasps are omnivorous” he opined. This explanation did nothing to alleviate the annoyance felt by the boys at the unwanted intrusion and regretting the decision to eat outside. Not wishing to linger more than necessary, it was time to set off home.