It feels like a long time since the last club outing due to the inclement weather, so the great orange ball in the sky was a welcome sight this morning.  Nine Knights turned out including two “new” faces, Sean and Geoff. With our illustrious Raymondo off on his jollies and no volunteer route master we were lost from the start. After various suggestions and route alternatives we decided to be gentle on those suffering with their winter ailments and headed for a flat route round to TJs.

We set off along Norwood and out along the cycle path to White Cross roundabout at a steady pace. With a gentle breeze behind, the pace picked up from Leven through Brandesburton and on to North Frodingham with Mike on the front performing as “lead out” man. A potential incident was avoided by quick reactions when an impatient white van driver decided to pass the whole line despite oncoming traffic. 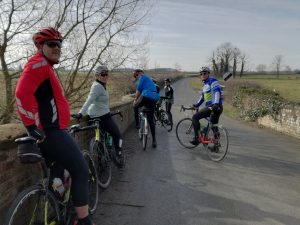 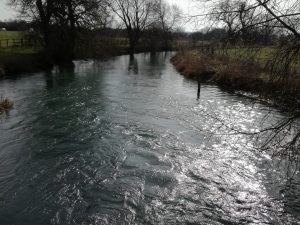 Should have brought the fishing rod!!!

After regrouping at Frodingham next stop was Wansford  by the Trout Inn. No trout spotted but a strong race running through Wansford beck. From here onwards, we had the wind on the bow making our progress somewhat tougher. After another brief stop in Skerne there was the final sprint to the café stop.

Arriving at TJs I found what had been making the annoying noise on my brand new bike, I had a screw loose!!!! Well lost actually, and the support had been rubbing against the tyre. As Steve mentioned, I’d not get away with a stealth attack from behind. Sounded like I’d sneaked in an electric motor! 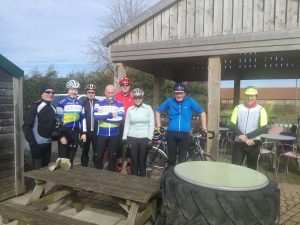 Refreshments completed we decided to pose for a group photo in the sun to show those enjoying themselves abroad, we are having a “heatwave” at home! Geoff then decided to abandon the group and head home on the main road while the rest of us headed home via Bracken, North Dalton and Etton.

The group passed through Cherry Burton where we came upon a glamorous group of cyclists (not that I’m biased because my wife was there) having just left the Bay Horse Pub. WOW, Women on Wheels. A very kind car driver allowed both groups to exit onto the Malton road where our group split with some taking the cycle path and others the main road before regrouping at the road works. Later, found out Sean suffered a puncture along the cycle path. Everyone then went their own way home whilst I headed for the bike shop to sort my lost screw.