Well some do have them as the saying goes! A number of the usual suspects had Motherly duties to perform, however we still managed to have a dozen turn out. Weather was very kind, feeling much more spring like recently. Sensing some reluctance in the group for hill climbing, Hornsea was suggested as our destination today.

We departed Market Cross through town along Grovehill road to the “magic” roundabout then over the Weel bridge and on to Tickton. Our first incident was not far away. At the cycle path cross-over, Brett decided to take advantage of a gap in the traffic and went “off piste” over the kerb. Unfortunately for him, his wheel went from under him in the process. It wasn’t so much a swan dive but would have made premier league footballer proud. Luckily there was sufficient gap before the first car arrived and Brett was soon on his way with some road rash to show for his troubles as well as scratches on that expensive looking bike.

Heading down the road to Meaux, Dave suffered a puncture. The guys riding in steerage remained with him while the bow section waited at the junction of Kidhill lane. Once regrouped it was off to Arnold then the underpass to Long Riston. With only light winds, a good pace was maintained then right through to Hornsea. We called into the Knights café in town centre to find they were only serving Sunday lunches. 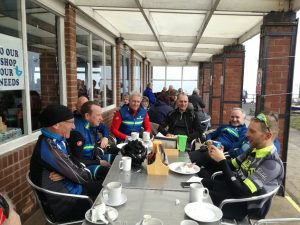 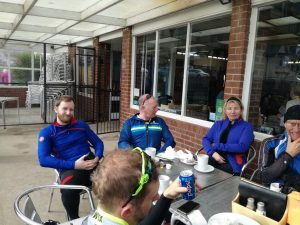 We decided to seek sustenance elsewhere and left and went to the Floral Hall café where there was a lovely selection of cakes, scones and sandwiches. Despite being quite busy, the service was excellent and it was just about warm enough to sit outside. 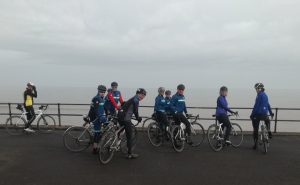 Suitably refreshed it was back on the road again. The general consensus was to take the shortest route home. Once out of Hornsea, we headed along Bewholme lane past a very busy looking Honeysuckle farm. With a light breeze in the sails it was a quick pace to return home via Brandesburton and Leven.