After Tuesday’s misdemeanours by unidentified individuals, all “bets” were off regarding the café destination and we were definitely NOT heading to TJ’s. Russell came it for a little stick immediately regarding his recently purchased socks which he insisted did not come from a passing circus.  “Right” said Raymond “We’ll head out east….any suggestions?” ‘In making such an offer he was acting very rash’ however the Spotted Duck at Fitling was quickly agreed to. “Now then… does anyone remember the way?” Up stepped Neil to the plate to offer his services as navigator, so the eight knights set off heading for Grovehill road to take us to the Weel road and on to Tickton. Travelling along the cycle path to Routh, we came upon an already large U3A group. After a quick chat with those we knew, we went our separate ways at the junction to Meaux as we headed south to Benningholme and Skirlaugh.

We soon found ourselves passing Burton Constable where our illustrious navigator stopped for a comfort break while the rest continued. Confusion soon arose however as we reached the next junction. Some of us recognised the road and suggested we should be heading that way. Fortunately we waited around the corner to ensure Neil took the same route only to see him fly by, “This wayyyyyyy!” he cried on the way past. Still unconvinced, the group looked around at each other for reassurance “Don’t ask me” said Alan “I’m out of my comfort zone in this neck of the woods”. Eventually Neil returned to convince everyone of the correct direction.

Back on track and nearing Humbleton, the pace started to pick up as Heather and Sharrin took to the front in an effort to “beat” Alan to be first to the café. A forlorn endeavour as the café stop was a bit further than they’d anticipated but they said he had to “sprint” the last few yards to maintain his status.

The drinks order was the first to arrive at the table, however Heather’s tea was passed over by Neil, who with the sleight of hand to impress any budding magician, palmed the biscuit from the saucer saying “You didn’t want the biscuit did you?”. When everyone had been served, a further bacon sandwich appeared and our trencherman extraordinaire showed remarkable restraint in refusing the offer. Just as well, as it was destined for another table. During our repast, Raymond, Neil and Steve were spotted checking google maps and discussing the best way back.

The return journey saw the knights retracing their steps back towards Burton Constable before turning off to Sproatley and round the “back” of Burton Constable estate leading to Coniston. The wind continued to assist our progress through Swine until turning east at Beningholme. Now we had a slight head wind, Steve took up the pace setting duties, “steady twenty” he said “We don’t want to lose anyone off the back”. Not sure if that was a cough and splutter from Raymond or just a harrumph.

Another great ride and no sign of the forecast of rain 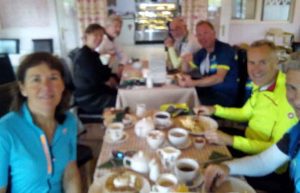 At the Spotted Duck 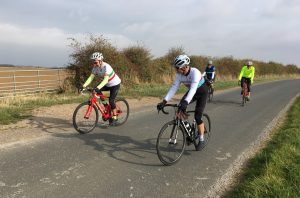 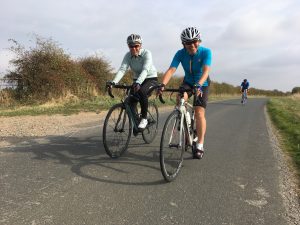 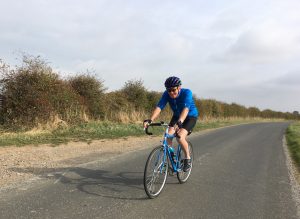