There was a distinct chill in the air this morning as the Master Painters gathered to compare their respective tools and equipment. Today was also the Beverley Food Festival with stalls aplenty set out all around the Market Cross. It would have been very tempting to just ride around the square and sample the wares before heading straight home, however Michelangelo (Pugwash) advised he’d hidden their Paint Pot at a seldom visited village called Elloughton. He went on to draw the outline of the route required to reach their element. Registered in today’s Master Class were  (Paul) Cezanne, David Hockney (Chris) and Claude Monet (Stephen) with some late additions turning up to swell the class numbers, Leonardo da Vinci (Jim) and Vincent van Gogh (Colin) followed finally by (Andy) Worhol.

Setting out over the Westwood, a brisk pace was set by Michelangelo in order to warm up quickly. Continuing on towards Newbald, Vincent and Monet took over the lead until reaching base camp at Col-de-Stoneknowle. Some of the class thought they’d sneak off and take the easy route to Cliffe road, however creating a masterpiece was never going to be so easy and off we set to reach the summit. At the steepest section there was lot of huffing and puffing from the young whippersnappers, at which point Leonardo and Michelangelo leapt onto the front leading to cries of “So much for help the aged” from Monet! The effort proved a little warming for Leonardo, who lacking the skill to go “no-handed” had to stop to remove his top layer, losing ground in the process.

The downhill sweep to Gardham was led by Andy Worhol with Michelangelo taking over at the bottom through the sprint challenge however, with no wind assistance, only a half-hearted effort was made. From Etton, we turned on to the Kiplingcotes road where we encountered the art of “mud wash”. Coupled with the overnight rain and tractor detritus it was time to proceed gingerly with the artists at the back suffering the most from splatter.

Next up was the Col-de-Arras hill with Cezanne taking up the lead role and Leonardo shadowing him closely. On reaching the downhill section into Sancton it was time for David Hockney, Cezanne, Monet and Worhol to “race” to the junction. After all the hill climbing it was time for more gentle slopes along Houghton lane leading to Cliffe road. The pace then picked up with lead changing hands several times on the way into North Cave. From there we followed a rather “abstract” route through South Cave, Ellerker and Brantingham before arriving at the Paint Pot. Standing outside the café, a comment was heard regarding the size of the frontage. Appearances are not everything and like the Tardis, more was revealed as Michelangelo led the class to the little suntrap around the back.

Even though the sun had come to shine on our endeavours, the class opted to “fill-in” inside the establishment where it was a tad warmer. After everyone had been served drinks, a further “flat white” was brought. The class looked around at each other with “not me” expressions until Leonardo, having already consumed an americano, sheepishly piped up “I think that’s for me”. Well I know Leo’s getting long in the tooth, but with “previous” for selective hearing we can now add a little colour blindness to his record. Perhaps we’ll all have to keep a closer eye on the coffee grabber. 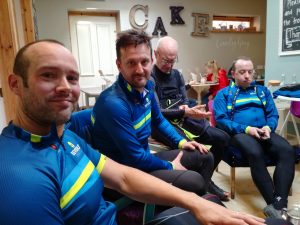 Jim checking his sleeve for his next trick 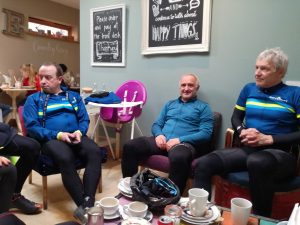 Andy “Did you really drink my coffee?”

Setting off home it was a case of the High road or the not so high road. Fuelled by the extra caffeine boost, the charge up the Dale was led by Leonardo but was chased down by Cezanne. There had been mention of extending the class by heading down to Raywell, however on reaching the Riplingham road, Leonardo and Vincent indicated a preference for a more direct route home  This was quickly adopted by the rest of the class.