It was a cool misty start for our ten knights at Market Cross this morning where route master Raymondo produced a menu of options, with three routes to Fiddle Drill and one for TJ’s. The starter menu was agreed, to proceed to Middleton-on-the-Wolds before deciding on the main course. Those with a lesser sense of direction (don’t tell ’em your name Jim) opted to play follow my leader.

Taking familiar routes, we set off over the Westwood to Cherry Burton, Etton and Holme-on-the-Wolds. The few little hills on the way giving early indication who was on the tortoise team from those on the hare team. On reaching the junction to Kiplingcotes, Mike decided to take early retirement from the group and head home. Corporal Jones was the leading hare on the run into Middleton. Once all regrouped, there was unanimous selection of the Warter road menu choice. “What a road” it was too. Must be one of the worst road surfaces we’ve traversed. For some, it was the first time they had tasted this course, so despite the early roughness we all enjoyed it.

Somewhere along this section the tortoises hatched a cunning plan to block one of the hares at the back while the rest of the hare gang zoomed off into the distance, except for corporal Jones keeping a lonely vigil somewhere between the two groups. With the hare gang taking a rest at Nunburnholme top, the tortoises eventually caught up allowing the back marking hare to pass on the long sweep down into Londesborough. The chase was then on. Corporal Jones setting a cracking pace with Captain Pugwash in hot pursuit. However, just like the greyhound chasing the rabbit, every time the Cap’n looked like gaining, the Corporal put down some more watts to maintain his lead.

After regrouping again at the A614 roundabout, it was off for the final run through Market Weighton to Goodmanham and the café stop at Fiddle Drill. Scones with jam and cream seemed to be a popular selection for the sweet course, which left Norman lamenting his choice of packaged energy bar. 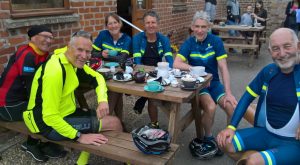 Refuelled and ready for the off 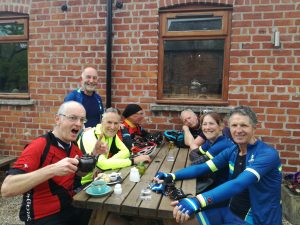 How to squeeze 8 into a table for 6

Heading up the Goodmanham road

On completion of refuelling, Chopper and Jenny decided to forgo the afters and left the group for another early afternoon rendezvous. The remaining seven returned on the same roads as the outward journey.