Our trusty Friday navigator was feeling under the weather this morning and was not able to make the start. A flat steady ride had been proposed with Capt’n Pugwash suggesting Burton Agnes as a possible destination. Admiral Neil stepped in to map out the route for the seven Knights who met at Market Cross including three of our fair maidens. The weather forecast was favourable with light south-westerly winds.

Departing Beverley along Norwood towards Tickton, the fleet ground to an early halt at the cycle path cross over when a continuous stream cars appeared to be heading into Beverley. Eventually one kind person stopped to let our group across the road. After a breather at Whitecross roundabout, it was off through Leven and on to Brandesburton. With a nice wind on the port quarter filling the sails a good steady pace was maintained. On reaching North Frodingham, it was time to consult the chart to reconfirm the route before heading for Foston-on-the-Wolds. From there it was through Great Kelk and Gransmoor before reaching the far east port of Burton Agnes. With quiet roads and a favourable wind the passage was smooth and ideal for cycling. 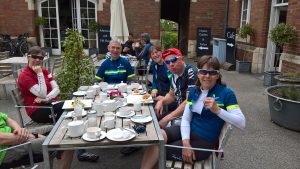 Russell managing to not be included in the cafe photo at Burton Agnes by being too laid back.

On arriving at the café, we found Corporal Jones had played a flanker by entering the back door via Shady Lane while the rest took the longer route to the front door. Once we were all served, it was a chance to sit in the sun and for the Admiral to recover from the shock of the mortgage required to pay for such meagre fare. I’d thought it was only us Scots with a reputation for being canny with the bawbees, however since the Scots raided this far south some genes must have been passed on!

The return journey was a tougher prospect with generally adverse winds, though fortunately light. The road surface on the section through Harpham and Lowthorpe required a lot of attention with frequent shouts of “pothole” piercing the air. Once back at Wansford, we were onto more familiar roads taking us to Skerne and Hutton Cranswick. The openness of the land around Burnbutts lane exposed the fleet to the full force of the wind. Time to tuck in and hold the wheel of the one in front. 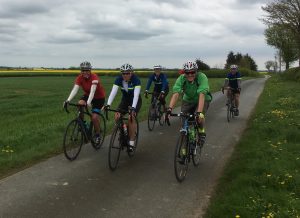 On the way back from Burton Agnes Cafe with The Captain, Russell, Alan, Sharrin, Lesley and Heather 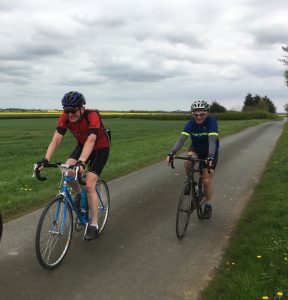 The drop down towards Bracken farm gave a welcome break if only temporarily. From there we followed our usual return through South Dalton, Etton and Cherry Burton.

Overall a very good day in the saddle with pleasant weather and company to match. 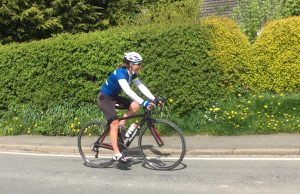 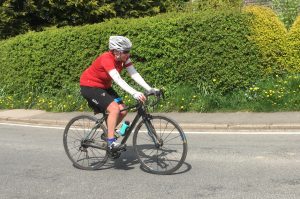 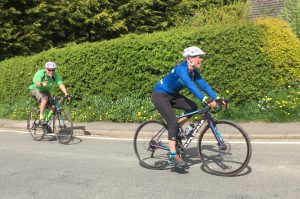