Eleven knights put in an appearance at Market Cross this morning. It was a cloudy dull start, but with little wind it promised to be perfect for cycling. Only fly in the ointment was a possible shower forecast for around 1pm. While waiting for everyone to gather, a familiar looking cyclist passed by, Graham Stuart. Perhaps we should have asked him to stay and be the official ride starter.

In the absence of our usual route master, Millington was quickly agreed as the destination. When the Nunburnholme question was raised, it was like a game of poker with everyone keeping their cards close to their chest, opting to see how fit they felt before committing themselves.

The initial part of the journey saw us following Friday’s route outward to Middleton-on-the-Wolds. From there it was on to North Dalton then the long slog up to Huggate. A slight gap appeared in the group on the way, with Stephen and Mark acting as shepherds, back-tracking to round up the back markers.

At the top of the drop into Millington dale, a freewheel challenge was announced. Raymond was first off, not sure if he heard the call, followed closely by Pugwash who failed miserably and was soon back on the pedals. Jenny was another who gave up as many others came whizzing past. James was making a good effort to push the bike onwards, however I think it works better when you’re off the bike. In the end it was Andy who took the honours for the furthest reach of about two miles. Some suggested he may be gravitationally assisted in this effort, I couldn’t possibly comment! 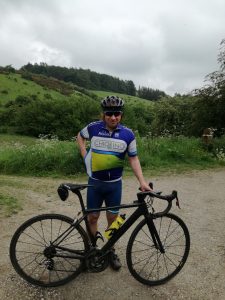 Andy winner of the freewheel challenge

Just at that moment, the puncture fairy paid a visit to James who was promptly out with the repair kit. Some of the group continued onwards with a smaller group remaining to admire the surrounding view and to give moral support while James showed his skills in changing an inner tube. 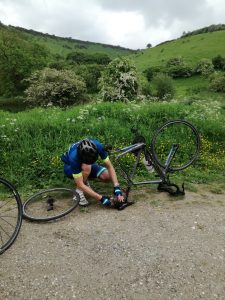 James getting ready for the lesson

We were soon on the way again and coming round the switch-back, we spotted Stephen ready to do a David Bailey. All smiles please! On arriving at the Ramblers Rest we found the place inundated with cycling groups. Perhaps they should change the name to Rouleur’s Rest.

I’m not sure what they put in the fare that was served up. Whatever it was, the sustenance it provided seemed to spur everyone on for the Nunburnholme challenge. Just as we were about to set off, Paul noticed he’d also had a visit from the puncture fairy who’d stuck a huge thorn through the tyre. After a bit of a struggle to remove the offending article, Paul and his “audience” set off in hot pursuit of the rest of the pack. Everyone came together again at the top of Nunburnholme Hill where the lead group had waited to form a reception committee. 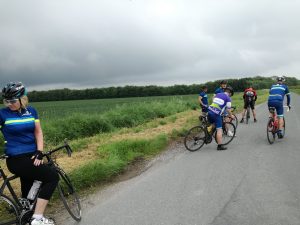 After that sterling effort, we were rewarded with the lovely long descent to Londesborough before the next climb at Intake hill. A sense of urgency then seemed to creep in as the pace picked up in an effort to get home before any rain appeared. Our route taking us through Market Weighton to Goodmanham and back along the Spring road. While waiting for everyone to regroup at Etton, we heard news that Stephen had suffered a crank malfunction and had called International Rescue in the form of Sharrin to recover the “crank”!

Another superb ride with great company had everyone looking forward to the next outing as they wended their various ways home.